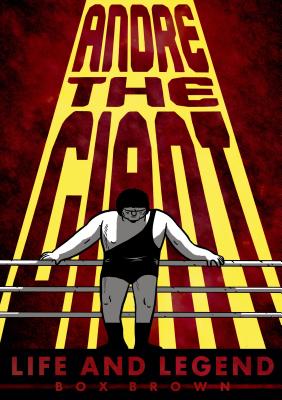 Towering at over 7 feet, Andre Roussimoff was never going to be a normal man. He found a place in the world of wrestling and despite deteriorating health, kept working until the end of his life. Box Brown presents a series of important moments in Andre's extraordinary life in this graphic biography. Even those uninterested in wrestling will enjoy this fascinating glimpse into the life of this unique man. — Marika McCoola

Andre Roussimoff is known as both the lovable giant in The Princess Bride and a heroic pro-wrestling figure. He was a normal guy who'd been dealt an extraordinary hand in life. At his peak, he weighed 500 pounds and stood nearly seven and a half feet tall. But the huge stature that made his fame also signed his death warrant.

Box Brown brings his great talents as a cartoonist and biographer to this phenomenal new graphic novel. Drawing from historical records about Andre's life as well as a wealth of anecdotes from his colleagues in the wrestling world, including Hulk Hogan, and his film co-stars (Billy Crystal, Robin Wright, Mandy Patinkin, etc), Brown has created in Andre the Giant, the first substantive biography of one of the twentieth century's most recognizable figures.

Box Brown is an Ignatz Award–winning cartoonist, illustrator, and comic publisher from Philadelphia. His books include the New York Times–bestselling Andre the Giant: Life and Legend, Tetris: The Games People Play, Is This Guy For Real?: The Unbelievable Andy Kaufman, Cannabis: The Illegalization of Weed in America, and Child Star.

"Its warts-and-more depiction of the French-born figure’s odd life is ably illuminated by Brown in a stylized but engaging manner." —Miami Herald

“Larger-than-average Andre the Giant had a larger-than-life personality to match, and award-winning cartoonist Brown manages to capture the legendary wrestler's career in charming, heartfelt black-and-white panels . . . Fans of professional wrestling aren't the only ones who will line up to read this one.” —Booklist

“Interesting and complex . . . fans can enjoy this intimate look into the life of an industry legend.” —School Library Journal

“It's clearly evident from every frame of The Princess Bride that Andre was not only one of the world's gentlest human beings, but also the kindest?a giant of a man in every way. I am thrilled to see his story finally told!” —Mandy Patinkin

"This book will thrill longtime fans and introduce a new generation to the man, the myth, and the legend known as the Eighth Wonder of the World.” —Mick Foley, three time WWE Champion, New York Times bestselling author

“Box Brown's melancholy tale of the sad, angry life of Andre the Giant is his best work yet. A poignant portrait of a troubled, complicated legend, wonderfully paced and beautifully rendered by one of the most stylish and distinctive comix creators working today. An impressive book by a major talent.” —Derf Backderf, My Friend Dahmer

“The spare line work and elegant storytelling carry the weight of a tragic story that both transcends and elevates the world of professional wrestling while painting a complex portrait of its biggest icon.” —Matt Kindt, Mind MGMT

“Is wrestling real? As real as any story is, Box Brown's story proves it while showing us how the real Andre the Giant made the most of what he had, even if all he had was a 7'5" (and falling), 463 pound (and rising) body.” —Jim Ottaviani, Feynman

“Box Brown tells Andre's story clearly and plainly: this book lets him be the human being he was. To paint a guy larger than life is easy, but to paint a guy true to life takes something special, and that special quality runs through this book. Just fantastic.” —John Darnielle, The Mountain Goats

"This comic is one that breaks the kayfabe — the wrestler’s fourth wall — not just of the performer but of the man." —National Post