Nocturnal Admissions: Behind the Scenes at Tunnel, Limelight, Avalon, and Other Legendary Nightclubs (Hardcover) 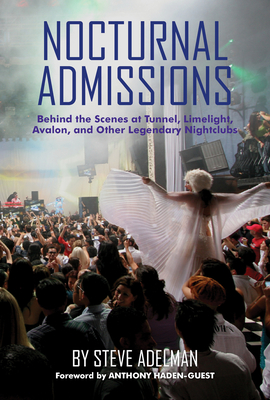 Steve Adelman's humorous and engaging memoir reflects on his years as the director and owner of some of the world's most popular nightclubs, including the Roxy, Limelight, Tunnel, and Palladium in the heyday of clubs in New York City during the 1980s and 1990s, followed by Avalon (Boston, Hollywood, NYC, and Singapore locations), and the New Daisy Theatre in Memphis. Nocturnal Admissions is a timely, unconventional look at one of pop culture's most outwardly glamorous, yet misunderstood industries, bringing the reader backstage into the world of nightlife at its highest level.

Wearing the multiple hats of ringmaster, entrepreneur, guidance counselor, multimillion-dollar dealmaker, and music soothsayer, Adelman chronicles an improbable journey from small town to big city, filled with a cast of characters he could never have imagined: People named Hedda Lettuce, Jenetalia, Maxi Min, and Jiggy, who collide with and around the likes of Jack Nicholson, Bruce Willis, Sir Richard Branson, Leonardo DiCaprio, RuPaul, Rudy Giuliani, and Snoop Dogg, among many, many others.

Nocturnal Admissions is a hilarious, adrenaline-filled ride through the peak decades of the world's most famous nightclubs and nightlife scenes.