The Band That Played on: The Extraordinary Story of the 8 Musicians Who Went Down with the Titanic (Paperback) 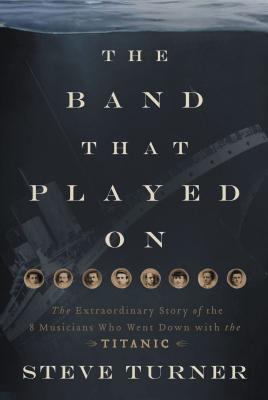 The Titanic epic from a unique perspective -- the individual lives of the eight musicians who gathered on the Boat Deck in a effort to allay panic while the ship sank beneath them. It was an example of personal courage during an event that should never have happened. Turner makes it clear that a concerted effort was made to shine the light of heroism on the band to deflect the public's focus on those who were responsible for the appalling loss of life. — Alden Graves

"They kept it up to the very end. Only the engulfing ocean had power to drown them into silence. The band was playing 'Nearer, My God, to Thee.' I could hear it distinctly. The end was very close." --CHARLOTTE COLLYER, TITANIC SURVIVOR

The movies, the documentaries, the museum exhibits. They often tell the same story about the "unsinkable" Titanic, her wealthy passengers, the families torn apart, and the unthinkable end. But never before has "that glorious band"--the group of eight musicians who played on as the Titanic slipped deeper and deeper into the Atlantic Ocean--been explored in such depth. Steve Turner's extensive research reveals a fascinating story including dishonest agents, a clairvoyant, social climbers, and a fraudulent violin maker. Read what brought the band members together and how their music served as the haunting soundtrack for one of modern history's most tragic maritime disasters.

The Band that Played On by Steve Turner is, surprisingly, the first book since the great ship went down to examine the lives of the eight musicians who were employed by the Titanic. What these men did?standing calmly on deck playing throughout the disaster?achieved global recognition. But their individual stories, until now, have been largely unknown. What Turner has uncovered is a narrow but unique slice of history?one more chapter of compelling Titanic lore.

Turner, a music journalist, pursued living relatives of the band members and squeezed all that he could out of "inherited photographs, documents, and anecdotes" enabling him to sketch brief but poignant portraits of eight young (or at least youngish) men, all born in an optimistic era and all members of the rising middle class. To their parents, their girlfriends, and surely to themselves as well, the future must have seemed bright right up until the early morning hours of April 15, 1912...

There is much that we do not know about the final hours of these men. Why did they make the decision to play on the deck that night? What was in their hearts and minds? ...

Even the Titanic survivors who witnessed their final performance quibbled over some details. Did the band march or did they kneel? Was their last number "Autumn" or was it "Nearer, My God, to Thee"? Did they stop playing during the final moments and pack their instruments away or were they still playing as the ship went down? All agreed, however, that all eight band members behaved with remarkable calm and courage. Within hours of the ship's sinking, their story was circulating and they had already become heroes...

For Turner, however, the undisputed hero of the book is Wallace Hartley, a fine musician with religious conviction and a powerful sense of duty who seems most likely to have been the force behind those final hours of heroism. In the last pages of the book, Turner reveals a surprising Hartley discovery?a turn of events which makes a fine ending for his worthy book, even as it leaves us hopeful that the Titanic may yet have a few mysteries she is willing to give up.
--Marjorie Kehe, Book Editor, Christian Science Monitor