The Light of Sex: Initiation, Magic, and Sacrament (Paperback) 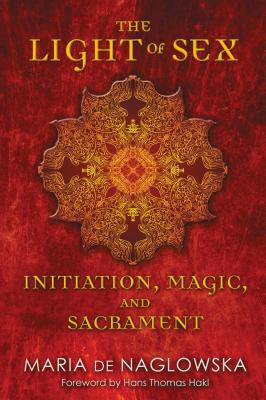 • Reveals mystic sexual practices for growth of the soul and enlightenment

• Explains the inner workings of the sex magic rituals of La confrérie de la Flèche d’Or [The Brotherhood of the Golden Arrow], the notorious occult order of 1930s Paris

Never before available in English, The Light of Sex expounds the tenets of the revolutionary religious system conceived by Maria de Naglowska--Russian mystic, occultist, esoteric high priestess, rumored lover of Julius Evola, and self-styled “Satanic Woman” of 1930s Paris. Centered on what she called the Third Term of the Trinity, in which the Holy Spirit of the classic Christian trinity is recognized as the divine feminine, her practices aim to bring about a reconciliation of the light and dark forces in nature through the union of the masculine and feminine. Revealing the spiritually transformative power of sex, she shows how--through mystic sexual practices and veneration of the feminine spirit--growth of the soul, regeneration of the world, and enlightenment of humankind can be achieved.

This mystic treatise and guide to the sexually charged rituals that were a cause célèbre in 1930s Paris was required reading for those seeking to be initiated into Naglowska’s magical group La confrérie de la Flèche d’Or [The Brotherhood of the Golden Arrow]. It reveals Naglowska to be a powerful visionary, whose psychic powers were legendary, and an important figure in the continuing evolution of the Western Mystery tradition.

“A legendary psychic and visionary, she was [Maia de Naglowska], and is, an important figure in the Western Mystery traditions, who has been little noticed until now by the English-speaking world.”
— Anna Jedrziewski, New Age Retailer, January 2011

“The Light of Sex is a fascinating historical record of the philosophies and rites of the Golden arrow, as conceived by Maria de Naglowska . . .”
— SpiralNature.com, July 2011

“The Light of Sex is worth considering for anyone who wants to understand another angle to the spirituality of sexuality.”
— Midwest Book Review, October 2011

“The Light of Sex is a fascinating historical record of the philosophies and rites of the Golden arrow, as conceived by Maria de Naglowska”
— Psyche, Facing North, July 2012

“...that it is fresh and thought-provoking look at metaphysical issues that should be of interest to all, and a point of entry into a chapter of modern occult history that has been largely and notably obscure.”
— Frater Lux Ad Mundi, Behutet, October 2012