The Entertainer: Movies, Magic, and My Father's Twentieth Century (Hardcover) 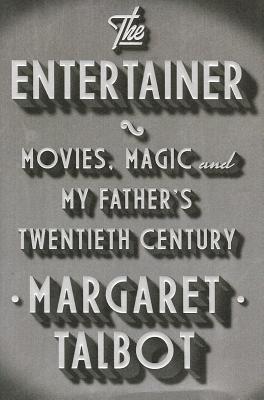 By Margaret Talbot
Call or email to see if a used copy is available.
Out of Print

An affectionate, warmly written biography of actor Lyle Talbot. Refreshingly free of the angst present in the literary recollections of the offspring of most famous people. Mr. Talbot’s long career encompassed almost every aspect of show business. This is an eloquent tribute to a real trouper. — Alden Graves

Using the life and career of her father, an early Hollywood actor, "New Yorker "writer Margaret Talbot tells the thrilling story of the rise of popular culture through a transfixing personal lens. The arc of Lyle Talbot's career is in fact the story of American entertainment. Born in 1902, Lyle left his home in small-town Nebraska in 1918 to join a traveling carnival. From there he became a magician's assistant, an actor in a traveling theater troupe, a romantic lead in early talkies, then an actor in major Warner Bros. pictures with stars such as Humphrey Bogart and Carole Lombard, then an actor in cult B movies, and finally a part of the advent of television, with regular roles on "The Adventures of Ozzie and Harriet "and "Leave It to Beaver." Ultimately, his career spanned the entire trajectory of the industry.

In her captivating, impeccably researched narrative a charmed combination of Hollywood history, social history, and family memoir Margaret Talbot conjures warmth and nostalgia for those earlier eras of 10s and 20s small-town America, 30s and 40s Hollywood. She transports us to an alluring time, simpler but also exciting, and illustrates the changing face of her father's America, all while telling the story of mass entertainment across the first half of the twentieth century.

Margaret Talbot has been a staff writer for "The New Yorker "since 2003. Previously, she was a contributing writer at "The New York Times Magazine "and an editor at "The New Republic." She lives in Washington, D.C.