Hope: a Tragedy: A Novel (Paperback) 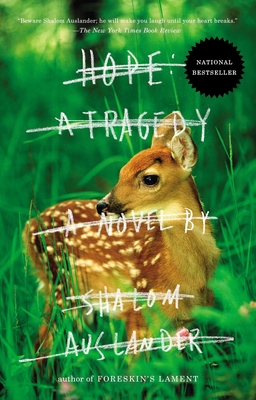 What would you do if you found Anne Frank, aged and maybe a little crazy, living in your attic? That's the jump-off point for a hilarious novel that's one of the best long-form Jewish jokes since Portnoy's Complaint. — Charles Bottomley

The bestselling debut novel from Shalom Auslander, the darkly comic author of Foreskin’s Lament and Beware of God.

Hope: A Tragedy is a hilarious and haunting examination of the burdens and abuse of history, propelled with unstoppable rhythm and filled with existential musings and mordant wit. It is a comic and compelling story of the hopeless longing to be free of those pasts that haunt our every present.

The rural town of Stockton, New York, is famous for nothing: no one was born there, no one died there, nothing of any historical import at all has ever happened there, which is why Solomon Kugel, like other urbanites fleeing their pasts and histories, decided to move his wife and young son there.

To begin again. To start anew. But it isn’t quite working out that way for Kugel…

His ailing mother stubbornly holds on to life, and won’t stop reminiscing about the Nazi concentration camps she never actually suffered through. To complicate matters further, some lunatic is burning down farmhouses just like the one Kugel bought, and when, one night, he discovers history—a living, breathing, thought-to-be-dead specimen of history—hiding upstairs in his attic, bad quickly becomes worse.

Shalom Auslander was raised in Monsey, New York. Nominated for the Koret Award for writers under thirty-five, he has published articles in Esquire, The New York Times Magazine, Tablet, The New Yorker, and has had stories aired on NPR's This American Life. Auslander is the author of the short story collection Beware of God and the memoir Foreskin's Lament. He is the creator of Showtime's "Happyish." He lives in New York City. To learn more about Shalom Auslander, please visit www.shalomauslander.com.

Praise for Hope: A Tragedy

“Staggeringly nervy… Other fiction writers have gotten this fresh with Anne Frank. But they don’t get much funnier… [Auslander] is an absurdist with a deep sense of gravitas. He brings to mind Woody Allen, Joseph Heller and – oxymoron here – a libido-free version of Philip Roth… It’s a tall order for Mr. Auslander to raise an essentially comic novel to this level of moral contemplation. Yet Hope: A Tragedy succeeds shockingly well.”  – New York Times

“Shalom Auslander is my kind of Jew — an unapologetically paranoid, guilt-ridden, self-loathing Diaspora kvetch, enraged by a God he can’t live with or without. While others of his generation may mine the tradition for a fond retrieval of forgotten lore, Auslander throws stones at the fiddler on the roof. He’s a black comic who’s alloyed the manic existential shtick of Lenny Bruce with the gallows humor that’s been a staple of the repertoire since the Babylonian Exile…. He is patently not good for the Jews…. A virtuoso humorist, and a brave one: beware Shalom Auslander; he will make you laugh until your heart breaks.” – New York Times Book Review

“Absurdist, hilarious … Part Sholom Aleichem, part Woody Allen, part homage to Philip Roth's The Ghost Writer, it is a story of neurotic Jews, the problem of memory and the solace of suffering. "It's funny," begins the novel, and it is…. To hope, we must misremember. So we build structures of misremembering: We build fictions. Auslander's first novel, Hope: A Tragedy: A Novel is a beautiful one.” -- Cleveland Plain Dealer

“An irreverent (and how!), dark (to say the least), hilarious novel about a man who finds a beloved historical figure hiding in his attic.” -- O, the Oprah Magazine

“There is an admirable fearlessness to Shalom Auslander’s writing . . . [His] ruminations and his clever inversions of conventional wisdom can challenge readers to re-examine opinions they probably take for granted, particularly regarding how the history of the Holocaust is remembered and taught.” – San Francisco Chronicle

“Poisonously funny…. Like an unintentional bark of laughter at a funeral.” – Entertainment Weekly

“The real tragedy would be to miss out on [this] debut novel, brimming with dark humor.” Entertainment Weekly’s Must List

“Very funny; there is something very Wile E. Coyote about the ridiculous oppression that pursues Kugel… Vivid and very hard to stop thinking about.” – Forward

“The darkest of dark comedies. It’s as uncomfortably hilarious as it is shockingly offensive… Equal parts Philip Roth and Franz Kafka.” – Columbus Dispatch

“There are echoes of Kurt Vonnegut, Philip Roth and even Franz Kafka in this wildly original novel. And yet with Hope: A Tragedy, Auslander has created a story that’s uniquely his, with something in it to offend, enlighten and ultimately touch just about anyone.” -- BookPage

“Cultural anthropologists trying to figure out if there really is a recognizably Jewish voice and sense of humor, and if so, how it mixes and matches its key elements of self-deprecation, mordant compliance, hypochondria, and a total lack of surprise when disaster occurs, should consider Auslander’s debut novel….As funny as it is, the novel is also a philosophical treatise, a response—ambivalent, irreverent, and almost certainly offensive to some—to the question of whether art and life are possible after the Holocaust, an examination of how to ‘never forget’ without, as Kugel’s infamous attic occupant puts it, ‘never shutting up about it.’” -- Publishers Weekly (starred review)