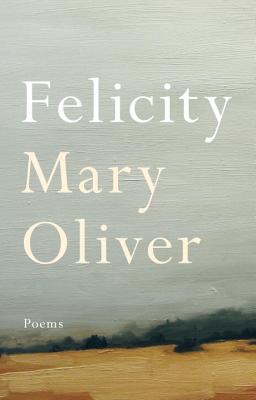 Meditations on love and nature, these poems celebrate connection and the mysteries of the human heart with warmth and gentle humor. — Amy Palmer

Meditations on love and nature, these poems celebrate connection and the mysteries of the human heart with warmth and gentle humor. — Amy Palmer

Mary Oliver, winner of the Pulitzer Prize, celebrates love in her new collection of poems

"If I have any secret stash of poems, anywhere, it might be about love, not anger," Mary Oliver once said in an interview. Finally, in her stunning new collection, Felicity, we can immerse ourselves in Oliver’s love poems. Here, great happiness abounds. Our most delicate chronicler of physical landscape, Oliver has described her work as loving the world. With Felicity she examines what it means to love another person. She opens our eyes again to the territory within our own hearts; to the wild and to the quiet. In these poems, she describes—with joy—the strangeness and wonder of human connection. As in Blue Horses, Dog Songs, and A Thousand Mornings, with Felicity Oliver honors love, life, and beauty.

“Oliver’s longtime fans and those who seek spiritual renewal will find themselves a worthy guide in this sagacious, pantheistic read.”—Publisher’s Weekly

“A breezy, inviting collection of love poems that celebrates the divine as much as it does the natural world or human relationships…An eloquent celebration of simple joy from one of America’s most beloved poets.” -The Washington Post

“One of the astonishing aspects of Oliver’s work is the consistency of tone over this long period [of her career]. What changes is an increased focus on nature and an increased precision with language that has made her one of our very best poets . . . There is no complaint in Ms. Oliver’s poetry, no whining, but neither is there the sense that life is in any way easy . . . These poems sustain us rather than divert us. Although few poets have fewer human beings in their poems than Mary Oliver, it is ironic that few poets also go so far to help us forward.”—Stephen Dobyns, New York Times Book Review

“It has always seemed, across her 15 books of poetry, five of prose and several essays and chapbooks, that Mary Oliver might leave us at any minute. Even a 1984 Pulitzer Prize couldn’t pin her to the ground. She’d change quietly into a heron or a bear and fly or walk off forever. Her poems contain windows, doors, transformations, hints on how to escape the body; there’s the ‘glamour of death’ and the ‘life after the earth-life’…The new poems teem with creation: ravens, bees, hawks, box turtles, bears. The landscape is Thoreauvian: ponds, marsh, grass and cattails; New England’s ‘salt brightness’; and fields in ‘pale twilight.’ The poems from Why I Wake Early (2004) are, in contrast, full of white things and ‘untrimmable light’; from Owls and Other Fantasies (2003), of watery sounds, singing, rain; from West Wind (1997), of starry distances and traveling.”—Susan Salter Reynolds, Los Angeles Times Sunday Book Review

“In a region that has produced most of the nation’s poet laureates, it is risky to single out one fragile 71-year-old bard of Provincetown. But Mary Oliver, who won the Pulitzer Prize in poetry in 1984, is my choice for her joyous, accessible, intimate observations of the natural world. Her “Wild Geese” has become so popular it now graces posters in dorm rooms across the land. But don’t hold that against her. Read almost anything in New and Selected Poems. She teaches us the profound act of paying attention—a living wonder that makes it possible to appreciate all the others.”—Renée Loth, Boston Globe