The Third Plate: Field Notes on the Future of Food (Hardcover) 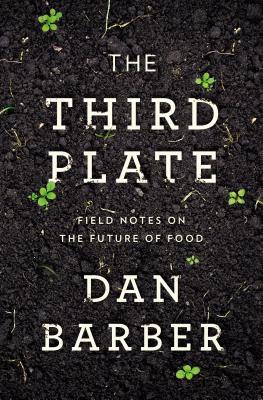 Barbor's book is an epistle. The book reads eloquently, despite horrifying stats, it is refreshing, often humorous.Simply, we have lost the taste for good food because taste has been "engineered out"; of soil and sea. He proposes an ecocentric model. I love this book for it's eloquence and texture; you retain the information good stories and recipes. — Maeve Noonan

“Not since Michael Pollan has such a powerful storyteller emerged to reform American food.” —The Washington Post

Today’s optimistic farm-to-table food culture has a dark secret: the local food movement has failed to change how we eat. It has also offered a false promise for the future of food. In his visionary New York Times–bestselling book, chef Dan Barber, recently showcased on Netflix’s Chef’s Table, offers a radical new way of thinking about food that will heal the land and taste good, too. Looking to the detrimental cooking of our past, and the misguided dining of our present, Barber points to a future “third plate”: a new form of American eating where good farming and good food intersect. Barber’s The Third Plate charts a bright path forward for eaters and chefs alike, daring everyone to imagine a future for our national cuisine that is as sustainable as it is delicious.

DAN BARBER is the executive chef of Blue Hill, a restaurant in Manhattan’s West Village, and Blue Hill at Stone Barns, located within the nonprofit farm Stone Barns Center for Food & Agriculture. His opinions on food and agricultural policy have appeared in The New York Times, along with many other publications, and he was recently showcased on Netflix's Chef's Table. Barber has received multiple James Beard awards, including Best Chef: New York City (2006) and the country’s Outstanding Chef (2009). In 2009 he was named one of Time magazine’s 100 most influential people in the world.

The Chicago Tribune
“[A]uthor Dan Barber's tales are engaging, funny and delicious... The Third Plate invites inevitable comparisons with Michael Pollan's The Omnivore's Dilemma, which Barber invokes more than once. And, indeed, its framework of a foodie seeking truth through visits with sages and personal experiments echoes Pollan's landmark tome (not to mention his passages on wheat cultivation, which, astonishingly, best Pollan's corn cultivation chapters by many pages.) But at the risk of heresy, I would call this The Omnivore's Dilemma 2.0... The Third Plate serves as a brilliant culinary manifesto with a message as obvious as it is overlooked. Promote, grow and eat a diet that's in harmony with the earth and the earth will reward you for it. It's an inspiring message that could truly help save our water, air and land before it's too late.”

The Washington Post
"Not since Michael Pollan has such a powerful storyteller emerged to reform American food.... Barber is helping to write a recipe for the sustainable production of gratifying food."

Pittsburgh-Post Gazette:
“There hasn’t been a call-to-action book with the potential to change the way we eat since Michael Pollan’s 2006 release, The Omnivore’s Dilemma. Now there is. Dan Barber’s The Third Plate: Field Notes on the Future of Food is a compelling global journey in search of a new understanding about how to build a more sustainable food system….The Third Plate is an argument for good rather than an argument against bad. This recipe might at times be challenging, but what’s served in the end is a dish for a better future….Barber writes a food manifesto for the ages.”

The Wall Street Journal:
"Compelling... The Third Plate reimagines American farm culture not as a romantic return to simpler times but as a smart, modern version of it...The Third Plate is fun to read, a lively mix of food history, environmental philosophy and restaurant lore... an important and exciting addition to the sustainability discussion.”

The Atlantic:
“When The Omnivore’s Dilemma, Michael Pollan’s now-classic 2006 work, questioned the logic of our nation’s food system, 'local' and 'organic' weren’t ubiquitous the way they are today. Embracing Pollan’s iconoclasm, but applying it to the updated food landscape of 2014, The Third Plate reconsiders fundamental assumptions of the movement Pollan’s book helped to spark. In four sections—'Soil,' 'Land,' 'Sea,' and 'Seed'—The Third Plate outlines how his pursuit of intense flavor repeatedly forced him to look beyond individual ingredients at a region’s broader story—and demonstrates how land, communities, and taste benefit when ecology informs the way we source, cook, and eat.”

The New York Times:
"Each grain represents an agricultural virtue: Rye, for example, builds carbon in the soil. Taken together, they argue for a new way of thinking about the production and consumption of food, a 'whole farm' approach that Mr. Barber explores, eloquently and zestfully, in The Third Plate: Field Notes on the Future of Food... Mr. Barber’s subjects tend to be colorfully eccentric and good talkers, capable of philosophizing by the yard. To put their efforts in context, Mr. Barber unobtrusively weaves in a hefty amount of science and food history. Readers will put the book down having learned quite a bit... Mr. Barber is a stylish writer and a funny one, too."

Publishers Weekly:“Barber’s work is a deeply thoughtful and–offering a ‘menu for 2050’–even visionary work for a sustainable food chain.”

Vice President Al Gore:
"Dan Barber’s new book, The Third Plate, is an eloquent and thoughtful look at the current state of our nation’s food system and how it must evolve. Barber’s wide range of experiences, both in and out of the kitchen, provide him with a rare perspective on this pressing issue. A must read.”

Ruth Reichl, author of Garlic and Sapphires and Tender at the Bone:
“In this compelling read Dan Barber asks questions that nobody else has raised about what it means to be a chef, the nature of taste, and what 'sustainable' really means. He challenges everything you think you know about food; it will change the way you eat. If I could give every cook just one book, this would be the one.”

Eric Schlosser, author of Fast Food Nation and Command and Control:
"Dan Barber is not only a great chef, he's also a fine writer. His vision of a new food system—based on diversity, complexity, and a reverence for nature—isn't utopian. It's essential."

Malcolm Gladwell, author of David and Goliath and The Tipping Point:
“I thought it would be impossible for Dan Barber to be as interesting on the page as he is on the plate. I was wrong.”

Elizabeth Kolbert, author of The Sixth Extinction and Field Notes from a Catastrophe:
“The Third Plate is one of those rare books that's at once deft and searching—deeply serious and equally entertaining. Dan Barber will change the way you look at food.”

Eliot Coleman, author of The New Organic Grower and The Four Season Farm Gardener’s Cookbook:
"After my first meal at Blue Hill, I paid Dan the ultimate farmer compliment. I told him that he made vegetables taste almost fresher after he had prepared them than when the farmer harvested them. Now I am equally impressed with his writing. Food has stories and Dan tells the stories as well as he cooks. If you want to know about food, read this book."

Andrew Solomon, author of Far from the Tree and The Noonday Demon:
“Dan Barber writes with the restrained lushness with which he cooks. In elegant prose, he argues persuasively that eating is our most profound engagement with the non-human world. How we eat makes us who we are and makes the environment what it is. It all needs to change, and Barber has written a provocative manifesto that balances brave originality and meticulous research. His food is farm-to-table; his eloquent, impassioned book is farm-to-heart."

Bill McKibben, author of Wandering Home:
“Dan Barber is as fine a thinker and writer as he is a chef—which is saying a great deal. This book uses its ingredients—the insights of some of the finest farmers on the planet—to fashion something entirely new: a recipe for the future.”