The Patriarch: The Remarkable Life and Turbulent Times of Joseph P. Kennedy (Hardcover) 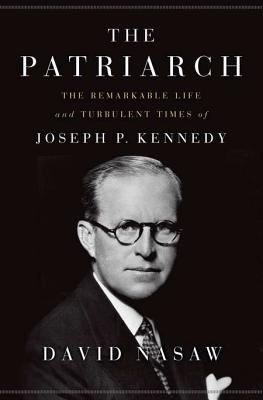 America's fascination with the Kennedys has lasted for a half-century. How odd that so little is known about the most fascinating Kennedy of them all...and what is known is so incomplete and often wrong. David Nasaw to the rescue. Scrupulously fair, exhaustively researched, and nearly impossible to put down. Riveting, surprising, and important. Highest Recommendation. — Bill Lewis

In this magisterial new work The Patriarch, the celebrated historian David Nasaw tells the full story of Joseph P. Kennedy, the founder of the twentieth century's most famous political dynasty. Nasaw—the only biographer granted unrestricted access to the Joseph P. Kennedy papers in the John F. Kennedy Presidential Library—tracks Kennedy's astonishing passage from East Boston outsider to supreme Washington insider. Kennedy's seemingly limitless ambition drove his career to the pinnacles of success as a banker, World War I shipyard manager, Hollywood studio head, broker, Wall Street operator, New Deal presidential adviser, and founding chairman of the Securities and Exchange Commission. His astounding fall from grace into ignominy did not come until the years leading up to and following America's entry into the Second World War, when the antiwar position he took as the first Irish American ambassador to London made him the subject of White House ire and popular distaste.

The Patriarch is a story not only of one of the twentieth century's wealthiest and most powerful Americans, but also of the family he raised and the children who completed the journey he had begun. Of the many roles Kennedy held, that of father was most dear to him. The tragedies that befell his family marked his final years with unspeakable suffering.

The Patriarch looks beyond the popularly held portrait of Kennedy to answer the many questions about his life, times, and legacy that have continued to haunt the historical record. Was Joseph P. Kennedy an appeaser and isolationist, an anti-Semite and a Nazi sympathizer, a stock swindler, a bootlegger, and a colleague of mobsters? What was the nature of his relationship with his wife, Rose? Why did he have his daughter Rosemary lobotomized? Why did he oppose the Truman Doctrine, the Marshall Plan, the Korean War, and American assistance to the French in Vietnam? What was his relationship to J. Edgar Hoover and the FBI? Did he push his second son into politics and then buy his elections for him?

In this pioneering biography, Nasaw draws on never-before-published materials from archives on three continents and interviews with Kennedy family members and friends to tell the life story of a man who participated in the major events of his times: the booms and busts, the Depression and the New Deal, two world wars and a cold war, and the birth of the New Frontier. In studying Kennedy's life, we relive with him the history of the American Century.

DAVID NASAW is the author of Andrew Carnegie, which was a finalist for the Pulitzer Prize, awarded the New-York Historical Society Prize in American History, and named a New York Times Notable Book of the Year, and The Chief: The Life of William Randolph Hearst, winner of the Bancroft Prize for history and the J. Anthony Lukas Book Prize and a finalist for the National Book Critics Circle Award for biography. He is the Arthur M. Schlesinger, Jr. Professor of History at the Graduate Center of the City University of New York.

“Riveting… The Patriarch is a book hard to put down…As his son indelibly put it some months before his father was struck down: ‘Ask not what your country can do for you – ask what you can do for your county.’ One wonders what was going through the mind of the patriarch, sitting a few feet away listening to that soaring sentiment as a fourth-generation Kennedy became president of the United States.  After coming to know him over the course of this brilliant, compelling book, the reader might suspect that he was thinking he had done more than enough for his country.  But the gods would demand even more.”
—Christopher Buckley, The New York Times Book Review

"Panoramic. Never before has Joseph P. Kennedy's conduct been documented in such damning detail, and never before has the veredict on his character been rendered so persuasively."
—Wall Street Journal

“David Nasaw’s The Patriarch: The Remarkable Life and Turbulent Times of Joseph P. Kennedy is the sort of biography that begs to be called ‘magisterial.’"
—Boston Globe

"Nasaw was approached to write this biography by Kennedy's children Jean Kennedy Smith and the late Sen. Edward Kennedy, who offered unfettered access to previously unseen papers. The choice was brilliant. Having written admired biographies of Andrew Carnegie and William Randolph Hearst, Nasaw understands how titans of business operate. In this outstanding biography, he captures the reality of one of America's most complicated and controversial figures."
—USA Today

“Mr. Nasaw has the rare ability to see the big picture and frame the detail with careful scholarship -- all the while making room for elements that do not fit -- which in Joe Kennedy's case is quite a lot…. Mr. Nasaw's is a literate and searching exposition of the patriarch's life that offers the reader compelling answers to questions about JPK…. If The Patriarch doesn't scoop up some serious accolades for the writing of American history, the fix is in.”
—Pittsburgh Post Gazette

"Nasaw captures the full humanity of his subject... This is truly a 'definitive' biography."
—History Book Club