The Siege of Fort William Henry: A Year on the Northeastern Frontier (Hardcover) 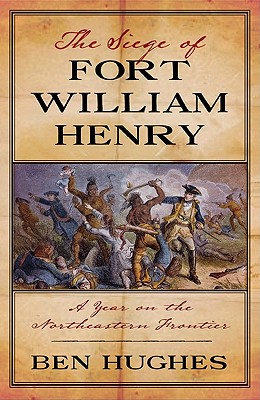 By Ben Hughes
Call or email to see if a used copy is available.
Out of Print

Many Americans may be surprised to learn that Hawthorne's "Last of the Mohicans" (and its film versions)is based on horrific events from 1757. Excellent combination of solid research and lively story telling. — Bill Lewis

Immortalized in "The Last of the Mohicans," the True Story of a Pivotal Battle in the British and French War for the North American Continent

The opening years of the French and Indian War were disastrous for the British. In 1755 General Braddock's troops were routed at the Battle of Monongahela and by the middle of 1756 Fort Oswego on Lake Ontario had fallen. Hindered by quarrelsome provincial councils, incompetent generals, and the redcoats inability to adapt to wilderness warfare, Britain was losing the war. In 1757 the 35th Regiment of Foot stepped into the breach. A poorly trained assortment of conscripts, old soldiers, and convicted criminals led by Lieutenant Colonel George Monro, the regiment was destined to take center stage in the most controversial event of the war. Fort William Henry on the southern shore of New York's Lake George was a key fortification supporting British interests along the frontier with French America. Monro and his regiment occupied the fort in the spring of 1757 while Britain planned its attack on the key French fortress at Louisbourg, Nova Scotia. Learning that most of Britain's military resources were allocated to Louisbourg, the French launched a campaign along the weakened frontier. French Commander Louis-Joseph de Montcalm and his American Indian allies laid siege to Fort William Henry; Monro could not hold out and was forced to surrender. As part of the terms, the British regiment, colonial militia, and their camp followers would be allowed safe passage to nearby Fort Edward. The French watched in horror, however, as their Indian allies attacked the British column after it left the fort, an episode that sparked outrage and changed the tactics of the war.

Seen through the eyes of participants such as Louis Antoine de Bougainville, a scholarly young aide-de-camp, Jabez Fitch, an amiable Connecticut sergeant, and Kisensik, a proud Nipissing chief whose father once met Louis XIV in the marbled halls of Versailles, "The Siege of Fort William Henry: A Year on the Northeastern Frontier "uses contemporary newspaper reports, official documents, private letters, and published memoirs to bring the narrative to life. From Indian councils on the banks of the Saint Lawrence River and bustling military camps in northern New York to the narrative's bloody denouement on the shores of Lake George, the reader is immersed in the colorful, yet brutal world of eighteenth-century northeastern America.

BEN HUGHES is a lecturer in England. He is the author of "Conquer or Die: Wellington s Veterans and the Liberation of the New World "and "They Shall not Pass: The British Battalion at Jarama.""