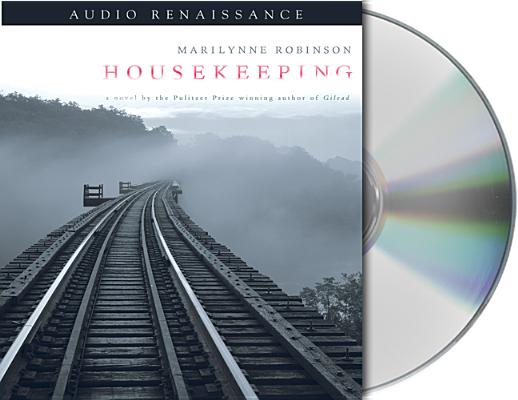 By Marilynne Robinson, Becket Royce (Read by)
Call or email to see if a used copy is available.
Hard to Find - May no longer be available

An unabridged audio edition of this classic work on the 25th anniversary of its first publication
A modern classic, housekeeping is the story of Ruth and her younger sister, Lucille, who grow up haphazardly, first under the care of their competent grandmother, then of two comically bumbling great-aunts, and finally of Sylvie, their eccentric and remote aunt. The family house is in the small Far West town of Fingerbone set on a glacial lake, the same lake where their grandfather died in a spectacular train wreck, and their mother drove off a cliff to her death. It is a town "chastened by an outsized landscape and extravagant weather, and chastened again by an awareness that the whole of human history had occurred elsewhere." Ruth and Lucille's struggle toward adulthood beautifully illuminates the price of loss and survival, and the dangerous and deep undertow of transience.

MARILYNNE ROBINSON is the author of the novel Gilead and two books of nonfiction, Mother Country and The Death of Adam. She teaches at the University of Iowa Writers' Workshop.Becket Royce narrated Marilynne Robinson's Housekeeping for Macmillan Audio. She has also appeared on television in I'll Be Home for Christmas, The Kennedys of Massachusetts, As the World Turns, One Life to Live, and numerous commercials. Onstage, she has performed in New York and regionally in the plays The Male Animal, Macbeth, and many others.