Love All the People: The Essential Bill Hicks (Paperback) 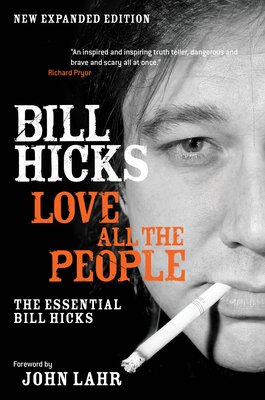 Bill Hicks was a comedic anomaly. Scathing and abrasive yet compassionate and empathetic, crass and obscene yet poetic and intellectual, Hicks’ raging philosophical humor could either ignite fires or quell them. Challenging regressive and hypocritical views in all forms, from the drug war to the Gulf War, blind nationalism to religious fanaticism, Hicks was at his purest when taking on the powerful and the ignorant. This posthumous release collects all of his stand-up comedy transcripts in order (and it’s fascinating to see how certain jokes and routines evolve over time) along with letters and song lyrics. — Joe Michon-Huneau

Love All the People, a collection of controversial comedian Bill Hicks' stand-up routines, notebooks, journals, and letters, traces his evolution from brilliant conventional stand-up to something far more interesting and dangerous: a comic speaking without fear. The result is a radical philosopher masquerading as a comedian, plumbing the American psyche with challenging (and side-splitting) conclusions. Hicks, who died of cancer in 1993, didn't go the easy way with his humor. He attacked the lies that justified the carnage of the Gulf War, the preposterous power of the mainstream media to confuse and corrupt, and the demeaning cynicism of the marketing culture. In Love All the People, that renegade comic artistry that made Bill Hicks an iconoclastic social commentator is recorded, celebrated, and revealed as true genius in this expanded edition that includes additional routines and other writings.