The Tiger Who Would Be King (Hardcover) 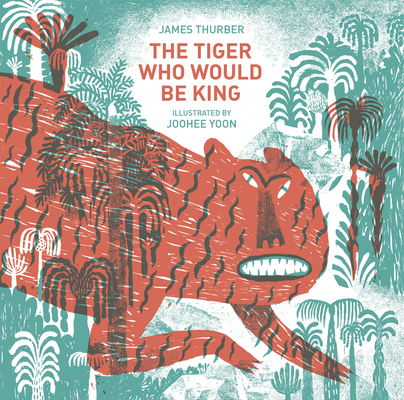 Prints in two striking colors capture the intensity of struggle when one tiger declares himself king of the jungle. Vis-à-vis Yoon's intuitive visual storytelling, "The Tiger" comes to life at an ever-increasing pace, pitching the animals (and readers) toward a breathtaking Guernica-esque gatefold. The moral? "You can't very well be the king of beasts if there aren't any." This is a New York Times Best Illustrated Book of 2015 for a reason. — Aubrey Restifo

Gorgeously illustrated and including two gatefolds that give us a panoramic jungle at war, The Tiger Who Would Be King is as entertaining as it is wise, as wry as it is passionate. Yoon's humorous images support this beautifully written text with wit and insight. Her final portrait of the tiger in a sea of silence will stay with the reader for a long, long time.

JooHee Yoon is an illustrator and printmaker. She strives to create picture books that can be enjoyed by people of all ages.

James Thurber joined the staff of the New Yorker in 1927. His contributions to that magazine, both as a writer and an artist, were instrumental in changing the character of American humor.

JooHee Yoon is an illustrator and printmaker committed to the art of bookmaking. She enjoys combining illustration with design whenever possible and using both traditional and industrial printing techniques for her projects. Rather than a single approach, she tries to match the tone of each project. She strives to create picture books that work on many levels and can be enjoyed by people of all ages. Humorist, James Thurber (Dec. 8, 1894 - Nov. 2, 1961), joined the staff of The New Yorker in 1927. His contributions to that magazine, both as a writer and an artist, were instrumental in changing the character of American humor. His stories and cartoons have been collected in over thirty volumes and there have been adaptations for the stage, television, movies, and musical presentations. Thurber House (www.ThurberHouse.org), continues the legacy of James Thurber and has awarded the Thurber Prize for outstanding American humor to such writers as Ian Frazier, Jon Stewart, Alan Zweibel, Joe Keenan and Calvin Trillin.