All Good Things: From Paris to Tahiti: Life and Longing (Paperback) 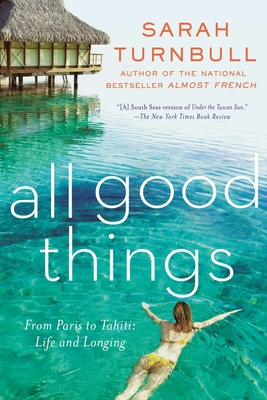 What I wouldn’t give to be given the opportunity to up and move to Tahiti. Turnball was given such a chance when her husband was relocated there for work. She discusses the realities of living on a beautiful, yet isolated island, as well as becoming acquainted with customs that are not your own. Turnball lets the reader in on some very personal moments in her life, whether it be her quest and ultimate struggle to have children or how alone she feels at times. She writes with such vivid imagery that from page one I felt as if I were joining her on her daily swim in the lagoon adjacent to her house. A lovely look into a couple of years in Sarah Turnball’s life. — Misha D'Andrea

Having shared her story in her bestselling memoir, Almost French, Australian writer Sarah Turnbull seemed to have had more than her fair share of dreams come true. While Sarah went on to carve out an idyllic life in Paris with her husband, Frédéric, there was still one dream she was beginning to fear might be impossible—starting a family. Then out of the blue an opportunity to embark on another adventure offered a new beginning—and new hope. Leaving behind life in the world’s most romantic and beautiful city was never going to be easy. But it helps when your destination is another paradise on earth: Tahiti.

Sarah Turnbull is the author of the international bestseller Almost French. She now lives in Sydney with her husband, Frédéric.

"Engaging . . . a South Seas version of Under the Tuscan Sun."
—The New York Times Book Review

“Turnbull is a perceptive, evocative guide to other lands and cultures.”
—Booklist

“Turnbull makes splendid use of her journalistic skills in this entertaining and heartfelt memoir recounting the joys and adventure of family life.”
—Publishers Weekly

“Fluid with vibrant passages about the physical beauty of the island, its tangible lushness…At its heart it is about creative longing and quiet despair.”
—The Western Australian


Deeply touching, this is for fans of her first memoir who are curious about her next adventure, and also for a more general audience attracted to the tale of facing the unknown with humility and delight. — Booklist

…jewels of insight—and the book shines with them—make Almost French a worthy read. Turnbull’s story will entertain, and edify, both armchair travelers and those of us nutty enough to try living here. — Joe Ray, The Boston Globe

Her easy-going narrative glides from her observations of the scenery and local culture to the influence of painters like Gauguin and Matisse…readers will be moved. — Herald Sun, Melbourne

One of Turnbull’s skills as a writer is to look beyond the surface of places that are the stuff of fantasy. — The Saturday Age, Melbourne

The pages of the book are fluid with vibrant passages about the physical beauty of the island, its tangible lushness and the impact of the Polynesians close to them. At its heart it is about creative longing and the quiet despair Turnbull is thrown into when this is frustrated. — West Autralian


…a love song to Paris and France, yes, but a love song in a minor key…Readers looking for a cool dose of reality…will be rewarded many times over…[Turnbull’s] got a quick mind, a good heart and a sharp eye for life’s oddities and contradictions. France isn’t a place she has used as raw material for an arch, self-serving book, but a place where she has chosen to live and to become almost—but far from wholly—French…She tells the story of how this came to pass with honesty and a refreshing absence of self-importance. The emphasis in Almost French certainly should be on almost, but Sarah Turnbull seems to have gotten a lot closer to the real thing than most of us who will always be on the outside looking in, even those of us who imagine otherwise. — Jonathan Yardley, The Washington Post Book World

Turnbull’s account of navigating another culture, learning a new language, and reinventing her professional self is a delight to read, filled with observational humor. — Booklist

Turnbull moves her story between the frustration of confrontations with shopkeepers to the wonders of learning that the taste of cheese depends on whether the cows are grazing on spring grass or eating a winter diet of straw. She explores and offers explanations for the French perspectives on issues such as feminism, cooking, homelessness, and family. For those who have visited France, the explanations have a ring of truth. — Maureen Goggin, The Boston Globe

…full of honest ups and downs…its explorations of the “cultural quicksand” Turnbull gradually adapts to are fascinating. I hope to visit Paris one day, and am grateful to learn so many ways to avoid being an ugly American. — Seattle Times/Post-Intelligencer

Anyone who finds herself in a situation like Turnbull’s…will be luckier; she’ll have Turnbull’s warm, clear prose to soothe frayed nerves. — Newsday

You’ll love this true story of a woman who left her life behind for a sexy foreigner. — Cosmopolitan

A bestseller in Turnbull’s native Australia, this cute firsthand look at the hardships of settling into a city infamously chilly to outsiders gives a glimpse of the true nature of Parisians and daily life in their gorgeous city…This is an engaging, endearing view of the people and places of France. If books like A Year in Provence and Under the Tuscan Sun are any measure, there’s a ready market for Turnbull’s contribution to the European expat memoir genre. — Publisher's Weekly

Love and adjustment in a foreign climate…she delivers so much, and so intelligently, on…her life there…An engaging story of a sometimes rocky but ultimately affectionate relationship with another culture. — Kirkus Reviews

Sara Turnbull’s Almost French is a must read for those of us who are being forced to integrate into another culture…Sara’s tales are representative of what one might experience in any unfamiliar world…Like Peter Mayle’s A Year in Provence and Frances Mayes’ Under the Tuscan Sun, Almost French treats the reader to an insider’s view of the challenges of integrating oneself into a totally different culture. — TravelLady Magazine

Almost French…details a fantasy many women have: falling in love with a Frenchman and being taken to his country where she soon is transformed into the kind of chic, sophisticated, scarf-tying woman France is known for…she has some sage advice for those perpetually confused by the French. She explains it all, her love for Paris shining clearly through the story of her own metamorphosis. — Judy Babcock Wylie, The Daily Harold, Arlington Heights, IL

Turnbull has a wry sense of humor, one that lets us see how difficult it is for a foreigner…to fit in, and feel at home, with the French. — Taconic Newspaper Group

Turnbull has a wry sense of humor, one that lets us see how difficult it is for a foreigner…to fit in, and feel at home, with the French. — The Ripsaw News

Though not a cultural study, it is as educational as it is entertaining. This memoir is a breezy and enjoyable read that offers an insightful look into French culture. — Booknews from The Poisoned Pen