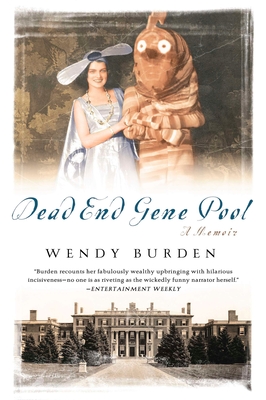 Anyone who has ever foolishly harbored the notion that money can buy happiness is urged to read this harrowing account by one of the heirs of the Vanderbilt fortune. An unsparingly frank memoir, it is, by turns, both funny and horrifying. Ms. Burden's saving grace in her book, as it probably is in her life, is a buoyant sense of humor that manages to prevail over the traumas traditionally inflicted on the rich and privileged. — Alden Graves

Hilarious and tragic, this is a memoir of someone with a healthy sense of humor and appreciation for the bizarre cards dealt by life and family. Sharp writing and the absence of self pity makes this a refreshing and delightful read. — Karen Frank

“Burden's memoir of her branch of the family descended from Cornelius Vanderbilt is a delightful cautionary tale of the super rich who inherit a large fortune. The family's unraveling, erratic behavior and eccentricities make up a morbidly fascinating story.”
— Avery Dickey, Inkwood Books, Tampa, FL

“Burden's memoir of her branch of the family descended from Cornelius Vanderbilt is a delightful cautionary tale of the super rich who inherit a large fortune. The family's unraveling, erratic behavior, and eccentricities make up a morbidly fascinating story.”
— Avery Dickey, Inkwood Books, Tampa, FL

For generations the Burdens were one of the wealthiest families in New York, thanks to the inherited fortune of Cornelius "The Commodore" Vanderbilt. By 1955, the year of Wendy's birth, the Burdens had become a clan of overfunded, quirky and brainy, steadfastly chauvinistic, and ultimately doomed blue bloods on the verge of financial and moral decline-and were rarely seen not holding a drink.

When her father commits suicide when Wendy is six, she and her brother are told nothing about it and are shuffled off to school as if it were any other day. Subsequently, Wendy becomes obsessed with the macabre, modeling herself after Wednesday Addams of the Addams family, and decides she wants to be a mortician when she grows up. Just days after the funeral, her mother jets off to southern climes in search of the perfect tan, and for the next three years, Wendy and her two brothers are raised mostly by a chain-smoking Scottish nanny and the long suffering household staff at their grandparent's Fifth Avenue apartment. If you think Eloise wreaked havoc at The Plaza you should see what Wendy and her brothers do in "Burdenland"-a world where her grandfather is the president of the Museum of Modern Art; the walls are decorated with originals of Klee, Kline, Mondrian, and Miro; and Rockefellers are regular dinner guests.

The spoiled life of the uber-rich that they live with their grandparents is in dark contrast to the life they live with their mother, a brilliant Radcliffe grad and Daughter of the American Revolution, who deals with having two men's suicides on her conscience by becoming skinnier, tanner, blonder, and more steeped in bitter alcoholism with every passing year.

We watch Wendy's family unravel as she travels between Fifth Avenue, Virginia horse country, Mount Desert Island in Maine, the Jupiter Island Club, London, and boarding school, coming through all of it surprisingly intact. Rife with humor, heartbreak, family intrigue, and booze, Dead End Gene Pool offers a glimpse into the eccentric excess of old money and gives truth to the old maxim: The rich are different.

Wendy Burden is a confirmed New Yorker who, to her constant surprise, lives in Portland, Oregon. She is the great-great-great-great granddaughter of Cornelius Vanderbilt, which qualifies her to comment freely on the downward spiral of blue blood families. She has worked as an illustrator, a zookeeper, and a taxidermist; and as an art director for a pornographic magazine from which she was fired for being too tasteful. She was also the owner and chef of a small French restaurant, Chez Wendy. She has yet to attend mortuary school, but is planning on it.

"In this dark and humorous memoir, Wendy Burden takes us inside the family circus that was her side of the Vanderbilt dynasty, bringing American class structure, sibling rivalry, and the decline of the blue bloods vividly to life. It's a wonderful read."
-Gus Van Sant

"It provides a compelling window into a life you're glad you didn't have to live, and the woman who survived it, sense of humor intact."
-Boston Globe

"Burden's acknowledgment that she is focusing her memoir on her father's family (Vanderbilt heirs) because "rich people behaving badly are far more interesting than the not so rich behaving badly" reassures us at the outset that this will not be another standard-issue poor- little-rich-girl memoir. After her father's suicide when Burden was six, she spends her childhood largely ignored, shuttling between the home of her self-centered, globetrotting mother and her eccentric Park Avenue grandparents. Burden offers fascinating and voyeuristic insights into a little-known segment of society, the mega-rich American plutocracy in decline."
-Library Journal

"This blueblood tale is spun so deftly and so charmingly that it is easy to forget that this it is essentially a sad story of family neglect and degeneration. Burden joins the ranks of such memoirists as Augusten Burroughs and David Sedaris, who have successfully mined their dysfunctional childhoods for comedic gold."
-Booklist

"There's great tragedy and sadness that runs through the last three generations of the book's characters, and yet as I write this I find myself laughing at the memory of reading her descriptions and reactions to the world presented to her by fate (and genes). You will too."
-New York Social Diary