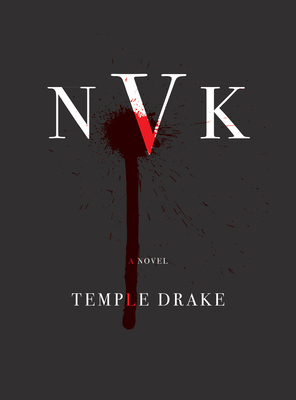 NVK was given a terrible review by Publisher’s Weekly. Thankfully I read the book before I read the review.
This novel is an overlapping story. It’s a flashpoint of sudden sexual desire that smolders. It’s when the “what if” actually happens. It’s the story of a curse brought about by a singular act to survive. It is a love story and horror story all in one. So, to the reviewer at PW ~ you were looking for something else. I found what the author intended. — Sarah Donner

A novel by RUPERT THOMSON writing as TEMPLE DRAKE

HER SECRET MUST BE KEPT FOR ALL ETERNITY.

One night in 2012, executive Zhang Guo Xing takes a group of European clients to a fashionable nightclub in Shanghai. While there, he meets a strikingly beautiful young Western woman called Naemi Vieno Kuusela. The physical attraction between them proves irresistible, and they embark on an intoxicating affair. But Naemi is not what she appears to be…

To Zhang’s surprise, she veers between passion and wariness, conducting the relationship entirely on her own terms. He feels driven to find out more about her, and is swiftly drawn into a web of intrigue, mystery, and horror. Is she a ghost? A demon? Do the living dead walk the streets of twenty-first century Shanghai?

Written in spare, high-octane prose, NVK is the first in a series of dark, hypnotic novels that explore the roots of desire and the cruel costs of immortality.

TEMPLE DRAKE is the pen name of acclaimed author RUPERT THOMSON, who has written eleven novels, including Never Anyone But You; Katherine Carlyle; Secrecy; The Insult, which was shortlisted for the Guardian Fiction Prize and selected by David Bowie as one of his 100 Must-Read Books of All Time; The Book of Revelation, which was made into a feature film by Ana Kokkinos; and Death of a Murderer, which was shortlisted for the Costa Novel of the Year Award. He lives in London.

“[An] original take on the horror genre…Spare, sexy, and atmospheric, it is as deep and dark as a Finnish forest.” —The Guardian, Brilliant Books to Transport You This Summer

“[This] gothic-drenched noirish tale unnerves and entertains…there’s something stealthily intriguing about Thomson’s handling of the uncanny and the menacing, and his subtle but insistent examination of sexual politics.” —The Times

“An atmospheric and evocative tale buoyed by a sensual affair, Drake’s debut is a compelling read.” —Booklist

“Finely calibrated…for all its mythological opulence, the tale’s central ambiguity—the question of who is preying on whom—seems urgently modern.” —The Guardian

“Seamlessly blending sophisticated gothic fantasy with a stylish, neon-lit allure, NVK is our sexy new obsession…Drake writes this thriller in a deliberately minimalist style that’s as spare and elegant as Scandinavian furniture…mysterious and bewitching.” —Apple Books, Top 10 Best Debut Novels of the Season