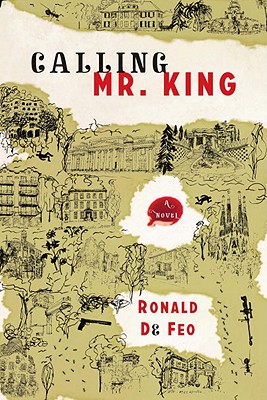 Quirky take of a hitman who, at the top of his game, develops a passion for art and architecture. What happens when his job as a contract killer interferes with visits to museums and art galleries makes for both a gritty and delightful read. — Sarah Knight

Long considered cool, distant, and absolutely reliable, an American-born hit man, working throughout Europe, grows increasingly distracted and begins to develop an unexpected passion for architecture and art while engaged in his deadly profession. Although he welcomes this energizing break from his routine, he comes to realize that it is an unwise trajectory for a man in his business, particularly when he is sent on the most difficult job of his career.
Set in London, Paris, New York, and Barcelona, Calling Mr. King is at once a colorful suspense tale, laced with dark humor, and a psychological self-portrait of a character who is attempting, against the odds, to become someone else.

Ronald De Feo has written reviews for The New York Times Book Review, The Nation, The New Republic, National Review, and Commonweal. His short fiction has appeared in such literary magazines as The Brooklyn Rail, The Hudson Review, and The Massachusetts Review. He worked at the Museum of Modern Art, was a senior editor of ARTnews Magazine, and served for many years on the editorial advisory board of Review Magazine, devoted to Latin American literature and the arts. This is his first novel.

“Whether pretending to be a British aristocrat in New York or unsentimentally confronting his dismal childhood, De Feo’s hit man is extremely liable, and the novel emerges as a study of the delights and dangers of reinvention.” —New Yorker

“Prepare to be unsettled, but take our word: De Feo’s concise voice and compelling characterization make this one worth it.” —Daily Candy

“It’s an engrossing story, persuasively depicting an angry, obsessive man as he comes to a greater awareness of the world around him…De Feo’s master strokes are in creating a remorseless psychopath you'd enjoy spending time with.” —Publishers Weekly

“De Feo is definitely a newcomer to watch.” —Kirkus Reviews

“It’s J.J. Connolly’s Layer Cake (with its anonymous hit man, dreams of retirement dancing in his head) with an icing of Fodor's Barcelona. This quirky, promising debut novel argues that assassins are people, too, and sometimes, like it or not, that means they're aspiring art wonks.” —LibraryJournal.com

“Calling Mr. King is an entertaining tale built on what happens when a high-end hit man begins to feel the awakening of an intellectual life. Ronald De Feo invites the reader to play for a while in a seldom-explored part of the borderland between sanity and insanity.” —Thomas Perry, author of The Butcher’s Boy

“Ronald De Feo’s Calling Mr. King is the smartest novel I’ve read in years with a hit man in the leading role. His hit man, a very original, quirky hit man, takes us on an amazing side trip of the world’s capitals, the world’s art and architecture, which makes this knowledgeable hit man irresistible.” —Barbara Probst Solomon, US cultural correspondent of El País