From Away: A Novel (Paperback) 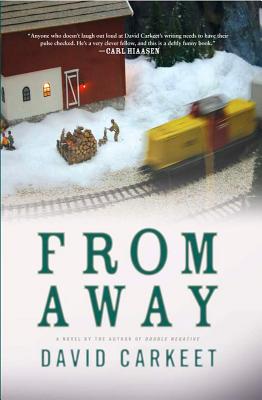 Denny Braintree, writer for a model railroad magazine, stranded in Montpelier in a snowstorm, is mistaken for missing local Homer Dumpling. Denny soon becomes the prime suspect in a murder, first as Homer, whose identity he's assumed, then as Denny. Clever, very funny. — Louise Jones

His night at the hotel begins with promise, but then his prospective one-night stand walks out on him. Leaving town, Denny is mistaken for look-a-like Homer Dumpling, a popular native son who mysteriously disappeared from town three years earlier. Instead of correcting the mistake, Denny dons his new identity as easily as a Vermonter's winter fleece, and a good thing too-the woman he had hoped to sleep with has turned up dead, and Denny is the chief suspect. As Denny tries to unravel the mystery, he struggles to hide his true identity from Homer's increasingly suspicious circle of family and friends, including Homer's prickly girlfriend. In Denny, Carkeet has crafted a fast-talking bumbler whose instinct for survival will face the ultimate challenge, with readers cheering him on all the way.

David Carkeet was born and raised in the Gold Rush town of Sonora, California. He went to college at U.C. Davis and Berkeley, then to graduate school at U. of Wisconsin and Indiana U.--thus the southern Indiana setting for "Double Negative," his first novel. He lived in St. Louis for 30 years, where he set "The Full Catastrophe" and "The Error of Our Ways." He now lives near Montpelier, Vermont, and you can probably guess where he set his newest novel, "From Away." He is married with three grown daughters. More info at davidcarkeet.com.