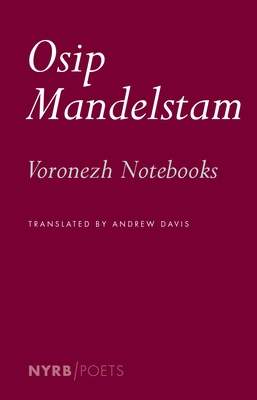 Osip Mandelstam is one of the greatest of twentieth-century poets and Voronezh Notebooks, a sequence of poems composed between 1935 and 1937 when he was living in internal exile in the Soviet city of Voronezh, is his last and most exploratory work. Meditating on death and survival, on power and poetry, on marriage, madness, friendship, and memory, challenging Stalin between lines that are full of the sights and sounds of the steppes, blue sky and black earth, the roads, winter breath, spring with its birds and flowers and bees, the notebooks are a continual improvisation and an unapologetic affirmation of poetry as life.

Osip Mandelstam (1891–1938) was born and raised in St. Petersburg, where he attended the prestigious Tenishev School, before studying at the universities of St. Petersburg and Heidelberg and at the Sorbonne. Mandelstam first published his poems in Apollyon, an avant-garde magazine, in 1910, then banded together with Anna Akhmatova and Nikolai Gumilev to form the Acmeist movement, which advocated an aesthetic of exact description and chiseled form, as suggested by the title of Mandelstam’s first book, Stone (1913). During the Russian Revolution, he left Leningrad for the Crimea and Georgia, and settled in Moscow in 1922,where his second collection of poems, Tristia, appeared. Unpopular with the Soviet authorities, Mandelstam found it increasingly difficult to publish his poetry, though an edition of collected poems did come out in 1928. In 1934, after reading a poem denouncing Stalin to friends, Mandelstam was arrested and sent into exile. He produced many new poems during these years, and his wife, Nadezhda, memorized his work in case his notebooks were destroyed or lost. (Her extraordinary memoirs of life with her husband, Hope Against Hope and Hope Abandoned, published in the 1970s, later helped to bring Mandelstam a worldwide audience.) In 1937, Mandelstam’s exile ended and he returned to Moscow, but he was arrested again almost immediately. This time he was sentenced to hard labor in Siberia. He was last seen in a transit camp near Vladivostok.

Andrew Davis is a poet, cabinetmaker, and visual artist. His current project is the long poem IMPLUVIUM. He divides his time between Santa Fe, New Mexico, and the north coast of Spain.

"Throughout Voronezh Notebooks, Mandelstam seems energized by an uncontainable joy in his dangerous disobedience. 'Fear makes it beautiful,' he says of his frozen surroundings. 'Something terrible might occur.'...Andrew Davis’s translation is vibrant and densely lyrical. More than his predecessors, he brings out a playful, gnomic quality in Mandelstam’s verse that calls to mind Emily Dickinson. He beautifully evokes a voice unafraid to burn itself out in the passion of creation." —Sam Sacks, The Wall Street Journal

“Mandelstam’s poems are both bold and delicate.  His imagery can seem both profoundly startling yet entirely natural. More than any other translator, Andrew Davis succeeds in reproducing all of these qualities.” —Robert Chandler

"Mandelstam was a tragic figure. Even while in exile in Voronej, he wrote works of untold beauty and power. And he had no poetic forerunners...In all of world poetry, I know of no other such case.  We know the sources of Pushkin and Blok, but who will tell us from where that new, divine harmony, Mandelstam's poetry, came from?" --Anna Akhmatova

"It is one thing to discover internal unity in a scholar's quiet career, quite another to find it in the works of a man subjected to years of harassment, terrorization, exile and proscription. In circumstances as hostile as those in the Soviet State, [Mandelstam] was forced to sacrifice everything...in order that this gift survive as it was meant to." --Sven Birkerts, The Iowa Review