Waiting for the Barbarians: Essays from the Classics to Pop Culture (Paperback) 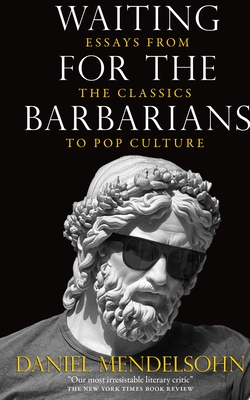 Over the past decade and a half, Daniel Mendelsohn’s reviews for The New York Review of Books, The New Yorker, and The New York Times Book Review have earned him a reputation as “one of the greatest critics of our time” (Poets & Writers). In Waiting for the Barbarians, he brings together twenty-four of his recent essays—each one glinting with “verve and sparkle,” “acumen and passion”—on a wide range of subjects, from Avatar to the poems of Arthur Rimbaud, from our inexhaustible fascination with the Titanic to Susan Sontag’s Journals. Trained as a classicist, author of two internationally best-selling memoirs, Mendelsohn moves easily from penetrating considerations of the ways in which the classics continue to make themselves felt in contemporary life and letters (Greek myth in the Spider-Man musical, Anne Carson’s translations of Sappho) to trenchant takes on pop spectacles—none more explosively controversial than his dissection of Mad Men.

Also gathered here are essays devoted to the art of fiction, from Jonathan Littell’s Holocaust blockbuster The Kindly Ones to forgotten gems like the novels of Theodor Fontane. In a final section, “Private Lives,” prefaced by Mendelsohn’s New Yorker essay on fake memoirs, he considers the lives and work of writers as disparate as Leo Lerman, Noël Coward, and Jonathan Franzen. Waiting for the Barbarians once again demonstrates that Mendelsohn’s “sweep as a cultural critic is as impressive as his depth.”

Daniel Mendelsohn is the author of a memoir, The Elusive Embrace; the international best seller The Lost: A Search for Six of Six Million; a translation of the works of C. P. Cavafy; and a previous collection of essays, How Beautiful It Is and How Easily It Can Be Broken. He teaches at Bard College.

“Our most irresistible literary critic. . . .Much of the fun of reading Mendelsohn is his sense of play, his irreverence and unpredictability, his frank emotional responses. . . .He forces the [essay] form in directions Francis Bacon never imagined.” —The New York Times Book Review

“ Mendelsohn is now, and has been for some time, the finest critic alive. . . . [The essays] proceed from an unparalleled understanding of the Greek and Roman roots of storytelling, which he braids into reviews with a subtlety and patience that is beautiful to behold. . . . A supremely entertaining book.” —Toronto Star

“ Mendelsohn’s work is absolutely vital in both senses of the word—it breaths with an exciting intelligence often absent in similar but stodgier writing, and it should be required reading for anyone interested in dissecting culture.” —The Daily Beast

“ Wide-ranging and absorbing, this new collection of essays from Mendelsohn is a joy from start to finish. . . . A wonderfully eclectic set of musings on the state of contemporary culture and the enduring riches of classical literature.” —Publishers Weekly (Starred Review)

“A throwback. . . to the glorious public intellectuals of former days such as Dwight Macdonald and Robert Warshow. . . . ‘Waiting for the Barbarians’ adds up to more than the sum of its parts, evidencing an impressive range, depth and nobility of mind.” —San Francisco Chronicle

“ No one who these past years has followed the brilliant work of Daniel Mendelsohn in the pages of The New York Review of Books, The New Yorker, and The New York Times Book Review will be surprised by the extraordinary range of interest this splendid collection reveals. What is so remarkable is the consistency of acuity and sympathy which he brings to all his subjects. . . .He is, it becomes increasingly clear, one of our major critics.” —PEN Art of the Essay Award Citation

“His essays often have a deft structure, building an essential question that is left hanging. Keep reading . . . and eventually you’ll arrive at the answer. But the pleasure is not in the answer, necessarily—it’s in the process.” —National Book Critics Circle Award Citation

“Mendelsohn brings to his subjects both an attentive eye and a sympathetic mind. . . .Mixed reviews, in other hands often as dull as ditchwater, become intellectual detective stories, and Mendelsohn provides illuminating, elegant solutions.” —Bookforum

“Waiting for the Barbarians is a demonstration of Mendelsohn’s stunning ability to think—not for us but a step ahead of us as readers, pulling out figments, fragments, and philosophies that we might not catch. . . .Reading Mendelsohn is a bit like lucid dreaming.”  —Interview

“These essays demonstrate what Coleridge called, in a striking phrase, ‘the armed vision,’ the highly trained critical intellect, powered by real scholarship and warmed by wit and empathy.” —The Denver Post

“ For Mendelsohn, TV is no less powerful or permanent than epic poetry in shaping, or describing, a society. We are what we watch, read and listen to. This may seem like a high-minded approach to pop culture, but Mendelsohn’s not above sitting back with a fistful of popcorn. . . . For the reader, it’s exhilarating to join him.” —The Plain Dealer

"Mendelsohn is a deep thinker with insightful charm.  All fans of intelligent thought on popular culture will appreciate his commentary." —Library Journal

"Even more than his earlier books about literature and culture, it displays his characteristic strengths of style and judgment and his distinctive and engaging voice. As always, he is surprising yet convincing when he praises what practically everyone else condemns, or sees through the pretensions and confusions of books and dramas that everyone else admires." —Edward Mendelson, The New York Review of Books

"[Mendelsohn] is a brilliant storyteller, influenced by the Greek masters he so admires…" —The Times of London

"A classicist by training and a critic by trade, he begins with a challenging subject and gloriously complicates it by drawing on his erudition, acumen, and passion for precision and bedrock truth….These are works of brilliant and soulful criticism." —Booklist

"Mendelsohn…is a gifted and entertaining writer. His prose is gorgeous and lyrical and his subjects are smartly considered and freshly revealed." —Vanity Fair