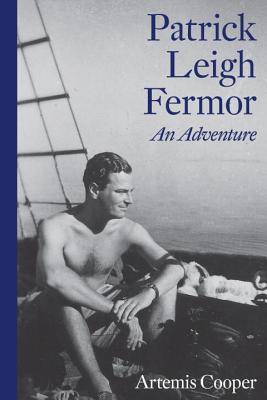 Yes - Fermor's life was an adventure: at 18, expelled from several schools, he walked from Amsterdam to Constantinople (now Istanbul), interrupted by WWII, during which he worked in British Intelligence in Greece, especially Crete. Afterwards, he traveled (between multiple affairs) and wrote engaging, evocative books. — Louise Jones

Patrick Leigh Fermor’s enviably colorful life took off when in 1934, at the age of eighteen, he decided to walk across Europe. In just over a year he had trekked through nine countries and taught himself three languages, and his enthusiasm and curiosity for every kind of experience made him equally happy in caves or country houses, among shepherds or countesses.

At the outbreak of war he left his lover, Princess Balasha Cantacuzene, in Romania and returned to England to enlist. Commissioned into the Intelligence Corps, he became one of the handful of Allied officers supporting the Cretan resistance to the German occupation. In 1944 he commanded the Anglo-Cretan team that abducted General Heinrich Kreipe and spirited him away to Egypt.

A journey to the Caribbean, stays in monasteries, and explorations all over Greece provided the subjects for his first books. It was not until he and his wife had moved to southern Greece that he returned to his earliest walk. In these books, which took many years to write, he created a vision of a prewar Europe, which in its beauty and abundance has never been equaled.

Artemis Cooper has drawn on years of interviews and conversations with Leigh Fermor and his closest friends, and has had complete access to his archive. Her beautifully crafted biography portrays a man of extraordinary gifts—no one wore their learning so playfully nor inspired such passionate friendship.

Artemis Cooper is the author of several books, including Cairo in the War, 1939–1945; the authorized biography of Elizabeth David, Writing at the Kitchen Table; and with her husband, the historian Antony Beevor, Paris After the Liberation, 1944–1949. Among the volumes she has edited are Patrick Leigh Fermor’s Words of Mercury and the correspondence between Evelyn Waugh and Cooper’s famous grandmother, Lady Diana Cooper.

Six books by Patrick Leigh Fermor are published by NYRB Classics:  A Time of Gifts; Between the Woods and the Water; A Time to Keep Silence; Mani; Roumeli; and The Traveller's Tree. Also, NYRB is the publisher of In Tearing Haste: Letters Between Deborah Devonshire and Patrick Leigh Fermor.

“The most beautifully written of modern “travel books” — an awkward term — may well be Patrick Leigh Fermor’s A Time of Gifts (1977) closely followed by its sequel Between the Woods and the Water (1986). These two volumes lyrically memorialize a youthful walk across Europe in 1933-34, starting from the Hook of Holland and passing through Germany and much of Eastern Europe....Artemis Cooper’s excellent biography, Patrick Leigh Fermor: An Adventure, fills in the details, corrects errors and makes clear that Paddy — as he was always known — often conflated incidents or fudged details in his writing, sometimes for reasons of art, sometimes to protect a friend or a woman’s reputation.” —Michael Dirda, The Washington Post

"Surprise is the keynote of the best travel writing.  The travel writer should be knowledgeable but not an expert, open in mind and body to the unforeseen twists of serendipity. But what we most require from travel writing... is that elusive quality Nick Carraway defined as 'romantic readiness.' Few 20th- century figures combined these traits in a more appealing package than the English writer Patrick Leigh Fermor.....Now Artemis Cooper has written an affectionately intimate, informative and forgiving biography...."— Christopher Benfey, The New York Times Book Review

"This engaging work sheds light on the life of one of Britain's greatest travel writers, with particular detail on his time in Greece, his war escapades, and his struggles with writing.  Recommended for lovers of armchair travel and those who enjoyed Sir Patrick's own writings. "— Library Journal

“Artemis Cooper has done a brilliant job of piecing together the shards of evidence about this glamorous but elusive writer, who seemed not to be able to resist mixing fact and fiction in his own life story.” —John Eliot Gardiner, The Wall Street Journal

"In her arresting biography of Patrick Leigh Fermor, an ever-curious travel writer known for experiencing locales at ground- level, Cooper, studies a man determined to see the world firsthand, with interviews from family and friends, rare letters, and diaries....Nostalgic and expertly written, Cooper fleshes out Fermor, a man who boldly traveled a world on the edge of catastrophe, which he explained in his writing to a faithful readership." —Publishers Weekly

One of The Independent’s “50 Best Winter Reads”

Short-listed for the inaugural Waterstones “Book of the Year”

“Patrick Leigh Fermor, who died last year [2011] at the age of 96, was one of the travel-writing greats, a war hero who related his journeys as a young man through Europe in classics such as A Time of Gifts and Between the Woods and the Water. Artemis Cooper draws on years of interviews with the author and his friends in this much-anticipated biography.” —The Guardian

“He lived an inspirationally heterodox life that combined adventure and reflection in unique measure. His story has hitherto been known only in parts, and mostly through the refractive prism of his own telling. At last his biography has been detailed in full, in Artemis Cooper’s tender and excellent book. Reading it is an odd experience: there is the melancholy of having one’s hero humanised, joined with renewed astonishment at the miracle he made of himself.” —The Guardian

“Artemis Cooper’s funny, wise, learned but totally candid biography reveals Leigh Fermor to be an adventurer through and through. The artifice of effortless gentility is blown away and Paddy is revealed as a much more interesting character, a fascinatingly self-made and self-educated man. He is also placed in the pantheon of literary liggers, a consummate lifelong freeloader, a prince among sponge-artists, which he paid for with his unique energy, talent and enthusiasm for song, dance, talk, memorised verse, drink and other men’s wives.” —The Independent

“A captivating biography.... It is not easy writing a biography of someone who has poured so much of his own life into his books, but Artemis Cooper has done a brilliant job. The story rips along, as Leigh Fermor’s life did, with friends and lovers, books and journeys and parties, all milling and jostling around him in a noisy and joyous throng. And in the quieter moments we are left with something far more enduring: a man for whom the world was endlessly fascinating, and who found that he could recreate for his readers with carefully crafted words the same wonder that it gave him.” —Philip Marsden, The Daily Mail

“It is not easy to convey the flavour of a man whose fame to a large extent rests on his ebullient personality and conversation but Ms Cooper succeeds admirably in this readable and entertaining book.” —The Economist

“Artemis Cooper’s fine biography gives colour and substance to the adventure, and a delicate, sympathetic portrait of the man who made it his life.” —The Scotsman

“Leigh Fermor was funny, learned, sexy, irrepressible, flawed yet much loved, remarkable and, at times, brilliant —not unlike this book.” —Anthony Sattin, The Guardian

“Patrick Leigh Fermor walked from Holland to Constantinople in the 1930s, swam the Hellespont, captured a German general, wandered the Caribbean, befriended everyone of consequence and wit, and wrote about it all in some of the most elegant, sinuous prose of the century. His friend Artemis Cooper has written the biography his singular life richly deserves.” —The Daily Beast

“Happy the hero who, after a lifetime of glorious achievement, in death finds a biographer worthy of his memory. Patrick Leigh Fermor...has been so widely celebrated in print, in film and in legend that the task of writing another 400 pages about him would seem, as he might himself say, Sisyphean. Artemis Cooper, however, rolls the immense boulder with an apparently effortless grace, and makes this marvellous book less a mere life story than an evocation.... He is justly commemorated in this magnificent biography, and will surely be remembered for ever as one of the very best of men.” —Jan Morris, The Telegraph