Autobiography of a Corpse (Paperback) 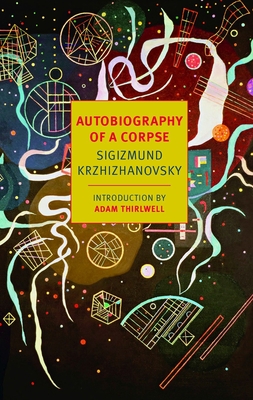 Kick off 2014 with an exciting discovery! Lovers of Poe, Borges and Kafka will savor these extraordinary fantasies, suppressed for decades by the Soviet Union. From a man trying to bite his own elbow to a fugitive hand set loose in the city, this is the stuff of dreams (and nightmares). — Charles Bottomley

Winner of the  2014 PEN Translation Prize

Winner of the 2014 Read Russia Prize

The stakes are wildly high in Sigizmund Krzhizhanovsky’s fantastic and blackly comic philosophical fables, which abound in nested narratives and wild paradoxes. This new collection of eleven mind-bending and spellbinding tales includes some of Krzhizhanovsky’s most dazzling conceits: a provincial journalist who moves to Moscow finds his existence consumed by the autobiography of his room’s previous occupant; the fingers of a celebrated pianist’s right hand run away to spend a night alone on the city streets; a man’s lifelong quest to bite his own elbow inspires both a hugely popular circus act and a new refutation of Kant. Ordinary reality cracks open before our eyes in the pages of Autobiography of a Corpse, and the extraordinary spills out.

Sigizmund Krzhizhanovsky (1887-1950), the Ukrainian-born son of Polish emigrants, studied law and classical philology at Kiev University. After graduation and two summers spent exploring Europe, he was obliged to clerk for an attorney. A sinecure, the job allowed him to devote most of his time to literature and his own writing. In 1920, he began lecturing in Kiev on theater and music. The lectures continued in Moscow, where he moved in 1922, by then well known in literary circles. Lodged in a cell-like room on the Arbat, Krzhizhanovsky wrote steadily for close to two decades. His philosophical and phantasmagorical fictions ignored injunctions to portray the Soviet state in a positive light. Three separate efforts to print collections were quashed by the censors, a fourth by World War II. Not until 1989 could his work begin to be published. Like Poe, Krzhizhanovsky takes us to the edge of the abyss and forces us to look into it. “I am interested,” he said, “not in the arithmetic, but in the algebra of life.”

Joanne Turnbull’s translations from Russian in collaboration with Nikolai Formozov include Sigizmund Krzhizhanovsky’s Memories of the Future and The Letter Killers Club (both NYRB Classics).

Adam Thirlwell is the author of two novels, Politics and The Escape; a novella, Kapow!; an essay-book, The Delighted States, winner of a Somerset Maugham Award; and a compendium of translations edited for McSweeney’s. He has twice been selected as one of Granta’s Best of Young British Novelists.

“Sly, vibrant, and often very funny, Krzhizhanovsky’s stories, originally written in the 1920s and ’30s (though virtually unpublished during the author’s lifetime), are a joy… Full of precise detail, this book will instruct, delight, and then leave the reader pondering long after the reading is finished.” —Publishers Weekly

"The stories in this collection by the early Soviet writer Sigizmund Krzhizhanovsky are nearly as fantastic as the crashing combination of consonants at the beginning of his surname."  —The New York Times Book Review

“As to the question of why he still deserves to be read, these stories represent strong entries in two different traditions of Russian literature: firstly, the unhinged, feverishly experimental universe, in which a pianist’s fingers can detach themselves from his hand and flee down the aisle of the concert hall, or where a cold man on the streets of Moscow can remove a strip of paper from a notepad and jot something down, transmogrifying the paper into ‘lodgings measuring one hundred square feet.’ Secondly, the grand woe of Dostoyevsky, in which is expressed the physic trauma of a frozen country so frequently torn asunder by ideology.” —The Daily Beast

“Sly, vibrant, and often very funny, Krzhizhanovsky’s stories, originally written in the 1920s and ’30s (though virtually unpublished during the author’s lifetime), are a joy…Full of precise detail, this book will instruct, delight, and then leave the reader pondering long after the reading is finished.” —Huffington Post

“In Thirlwell’s thoughtful introduction, the British novelist declares that Krzhizhanovsky’s mode is ‘the most useful vehicle available for the most intricate philosophy.’ This vehicle is also among the most palatable: If Krzhizhanovsky’s stories are intricately philosophic, they’re delivered in such an entertaining manner that the medicine goes down quite pleasantly indeed.” —The Boston Globe

“Krzhizhanovsky is one of the greatest Russian writers of the last century.” —Robert Chandler, Financial Times

“Krzhizhanovsky is often compared to Borges, Swift, Poe, Gogol, Kafka, and Beckett, yet his fiction relies on its own special mixture of heresy and logic.” —Natasha Randall, Bookforum

“There is no blackness in this author’s humour, not even in such a story as ‘Autobiography of a Corpse,’ which in its mild and amiable way, gives the impression of being what the title says it is. For a writer Krzhizhanovsky himself sounds an unusually nice man. His work, subtly subversive, as his editor rightly calls it, only started to be published as a whole in 1989, when what might be described as all the usual suspects, Kafka and Borges, Swift, Gogol and of course Samuel Beckett, were promptly trotted out by way of comparison. Krzhizhanovsky has certainly much in common with them, but the flavour and personality of his writing is all his own, as if it were a subdued and friendly personal conversation. His method, as he put it, was not to borrow from reality, but to ‘ask reality for permission to use his own imagination.’ ” —The Spectator

“Krzhizhanovsky wanted to perform imaginary experiments with the nature of time and space. Outside, in the streets, the Communist state was busy performing such experiments for real. In response, Krzhizhanovsky’s prose has a recklessly unstable tone in which delighted examination of impossible worlds can slip into ferocious political sarcasm.... It is a method for investigating how much unreality reality can bear.” —Adam Thirlwell, The New York Review of Books

“Krzhizhanovsky’s stories are more like dream diaries than fiction. Quite intentionally, he blurs the line between sleep and waking, real and unreal, life and death. While his translators admirably convey the whirligigging quality of his narratives, Krzhizhanovsky’s peregrinations demand unstinting focus and frequent compass checks. His characters often seem half, or wholly, asleep.... In Krzhizhanovsky’s tales, relics of a future past, he transports readers back to the present he renounced, to a life that’s ‘not-life, a gap in existence’—a place from which he sought refuge in fiction and dreams.” —Liesl Schillinger, The New York Times Book Review

“There was probably no worse time and place to be a postmodernist sage than in 1920s Russia. Still, bibliophiles like to believe that genius makes itself known, regardless of social pressures, and in the case of Ukraine-born Sigizmund Krzhizhanovsky, they may have a point—only it took about six decades for anyone else to catch on.... For all the cemetery...Krzhizhanovsky is also hilarious, and one wonders whether that might have troubled the Bolsheviks as much as anything in his work. Krzhizhanovsky understood the potency of juxtaposing wit with terror and the sacred with the profane.” —Los Angeles Times

“Krzhizhanovsky is not interested in picking apart the sense-making mechanisms of language that readers take for granted. Instead he is feeling out ways of conveying both the quotidian dreariness and the horrifying threat of violence of 1920s Soviet life.... Turnbull writes in the introduction that a Soviet editor dismissed Krzhizhanovsky’s work as “untimely,” a common shorthand for fiction that was not politically correct. But of course Krzhizhanovsky’s stories are exactly and deliberately timely: they observe the follies and cruelties of early Soviet life.” —Elaine Blair, The Nation

“[A]n awareness has grown that Krzhizhanovsky belongs with the best of the Russian prose writers who came to maturity in the post-Revolutionary decade. Like them, he sought and developed a new aesthetic in an altered world; and like them, he was soon thrown back on himself.” —Oliver Ready, Times Literary Supplement