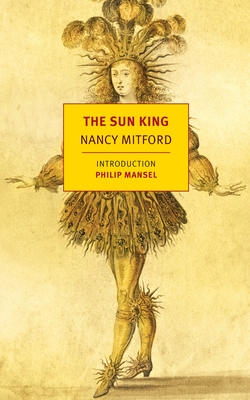 A “devastatingly witty” biography of Louis XIV and the Court of Versailles—at once a historical record of late 17th- and early 18th-century France and a gossip-filled narrative of lovers and rivals, artists and warriors (The New York Times)

The Sun King is a dazzling double portrait of Louis XIV and Versailles, the opulent court from which he ruled. With characteristic élan, Nancy Mitford reconstructs the daily life of king and courtiers during France’s golden age, offering vivid sketches of the architects, artists, and gardeners responsible for the creation of the most magnificent palace Europe had yet seen. Mitford lays bare the complex and deadly intrigues in the stateroom and the no less high-stakes power struggles in the bedroom. At the center of it all is Louis XIV himself, the demanding, mercurial, but remarkably resilient sovereign who guided France through nearly three quarters of the Grand Siècle.

Brimming with sumptuous detail and delicious bons mots, and written in a witty, conversational style, The Sun King restores a distant glittering century to vibrant life.

Nancy Mitford (1904–1973) was born into the British aristocracy and, by her own account, brought up without an education, except in riding and French. She managed a London bookshop during the Second World War, then moved to Paris, where she began to write her celebrated and successful novels, among them The Pursuit of Love and Love in a Cold Climate, about the foibles of the English upper class. Nancy Mitford was also the author of four biographies: Madame de Pompadour (1954; available as an NYRB Classic), Voltaire in Love (1957), The Sun King (1966), and Frederick the Great (1970). In 1967 Mitford moved from Paris to Versailles, where she lived until her death from Hodgkin’s disease.

“Irreverently lifts the skirts of the dolls of Versailles and rummages about underneath, exposing one gem of irresistible detail after another. . . . A glorious tribute to a glorious age.”
—The Irish Times

“[Mitford’s] interest is focused on the human beings whose hopes, frustrations, and tragedies are hidden behind the stiff brocade of the period. The splendid century had its seamy side, and her racy narrative alternates between the glory and the grime, the ermine and the vermin.”
—The New York Times

“History, like the kingdom of heaven, has many mansions, Nancy Mitford’s being, I suggest, a ravishingly pretty one, where anyone would be happy to spend time—and many have.”
—Antonia Fraser

“Nancy Mitford excels in depicting both the brilliant romantic showcase and the recessed world of power. . . . No historian writing in English has given a better pen-picture of Versailles in its heyday.”
—Time

“Nancy Mitford was particularly well-equipped to write about Louis XIV: She spent much of her adult life in France and possessed a sharp eye for detail.”
—Washington Post Book World

“Nancy Mitford gives vivid, indeed searching, portraits of the Grand Monarch, and of his awe-struck relations and courtiers . . . she summarizes a wealth of information about the king’s long, eventful life at Versailles . . . Readers will wish that her book were twice as long.”
—Sunday Times (London)