Between the Woods and the Water: On Foot to Constantinople: From The Middle Danube to the Iron Gates (Paperback) 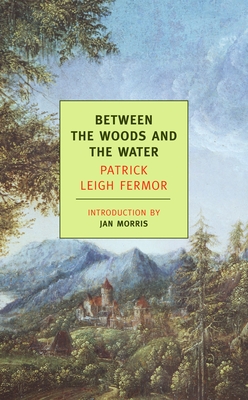 Continuing the epic foot journey across Europe begun in A Time of Gifts, Patrick Leigh Fermor writes about walking from Hungary to the Balkans.

The journey that Patrick Leigh Fermor set out on in 1933—to cross Europe on foot with an emergency allowance of one pound a day—proved so rich in experiences that when much later he sat down to describe them, they overflowed into more than one volume. Undertaken as the storms of war gathered, and providing a background for the events that were beginning to unfold in Central Europe, Leigh Fermor’s still-unfinished account of his journey has established itself as a modern classic. Between the Woods and the Water, the second volume of a projected three, has garnered as many prizes as its celebrated predecessor, A Time of Gifts.

The opening of the book finds Leigh Fermor crossing the Danube—at the very moment where his first volume left off. A detour to the luminous splendors of Prague is followed by a trip downriver to Budapest, passage on horseback across the Great Hungarian Plain, and a crossing of the Romanian border into Transylvania. Remote castles, mountain villages, monasteries and towering ranges that are the haunt of bears, wolves, eagles, gypsies, and a variety of sects are all savored in the approach to the Iron Gates, the division between the Carpathian mountains and the Balkans, where, for now, the story ends.

Jan Morris was born in 1926, is Anglo-Welsh, and lives in Wales. She has written some forty books, including the Pax Britannica trilogy about the British Empire; studies of Wales, Spain, Venice, Oxford, Manhattan, Sydney, Hong Kong, and Trieste; six volumes of collected travel essays; two memoirs; two capricious biographies; and a couple of novels—but she defines her entire oeuvre as “disguised autobiography.” She is an honorary D.Litt. of the University of Wales and a Commander of the British Empire. Her memoir Conundrum is available as a New York Review Book Classic.

"Those for whom Paddy’s prose is still an undiscovered country are to be envied for what lies ahead-hours with one of the most buoyant and curious personalities one can find in English." — The New York Sun

"Mr. Fermor…is a peerless companion, unbound by timetable or convention, relentless in his high spirits and curiosity." — Richard B. Woodward, The New York Times

"We are aware at every step that his adventure can never be duplicated: only this extraordinary person at this pivotal time could have experienced and recorded many of these sights. Distant lightening from events in Germany weirdly illuminates the trail of this free spirit." — The New York Times

"The young Fermor appears to have been as delightful a traveling companion as the much older Fermor a raconteur." — The Houston Chronicle

"[A Time of Gifts, Between the Woods and the Water] are absolutely delightful volumes, both for those who want to better understand what was lost in the violence of Europe’s 20th-century divisions and for those who appreciate the beauty and thrill of travel writing at its best." — The Houston Chronicle

"Leigh Fermor is recognizably that figure many writers of the past century have yearned to be, the man of action." — The Guardian

"He was, and remains, an Englishman, with so much living to his credit that the lives conducted by the rest of us seem barely sentient-pinched and paltry things, laughably provincial in their scope, and no more fruitful than sleepwalks. We fret about our kids’ S.A.T. scores, whereas this man, when he was barely more than a kid himself, shouldered a rucksack and walked from Rotterdam to Istanbul." — Anthony Lane, The New Yorker

“Even more magical...through Hungary, its lost province of Transylvania, and into Romania...sampling the tail end of a languid, urbane and anglophile way of life that would soon be swept away forever.” —Jeremy Lewis, Literary Review

“In these two volumes of extraordinary lyrical beauty and discursive, staggering erudition, Leigh Fermor recounted his first great excursion... They’re partially about an older author’s encounter with his young self, but they’re mostly an evocation of a lost Mitteleuropa of wild horses and dark forests, of ancient synagogues and vivacious Jewish coffeehouses, of Hussars and Uhlans, and of high-spirited and deeply eccentric patricians with vast libraries (such as the Transylvanian count who was a famous entomologist specializing in Far Eastern moths and who spoke perfect English, though with a heavy Scottish accent, thanks to his Highland nanny). These books amply display Leigh Fermor’s keen eye and preternatural ear for languages, but what sets them apart, besides the utterly engagin persona of their narrator, is his historical imagination and intricate sense of historical linkage... Few writers are as alive to the persistence of the past (he’s ever alert to the historical forces that account for the shifts in custom, language, architecture, and costume that he discerns), and I’ve read none who are so sensitive to the layers of invasion that define the part of Europe he depicts here. The unusual vantage point of these books lends them great pregnancy, for we and the author know what the youthful Leigh Fermor cannot: that the war will tear the scenery and shatter the buildings he evokes; that German and Soviet occupation will uproot the beguiling world of those Tolstoyan nobles; and that in fact very few people who became his friends on this marvelous and sunny journey will survive the coming catastrophe.” -- Benjamin Schwartz, The Atlantic

"This is a glorious feast, the account of a walk in 1934 from the Hook of Holland to what was then Constantinople. The 18-year-old Fermor began by sleeping in barns but, after meeting some landowners early on, got occasional introductions to castles. So he experienced life from both sides, and with all the senses, absorbing everything: flora and fauna, art and architecture, geography, clothing, music, foods, religions, languages. Writing the book decades after the fact, in a baroque style that is always rigorous, never flowery, he was able to inject historical depth while still retaining the feeling of boyish enthusiasm and boundless curiosity. This is the first of a still uncompleted trilogy; the second volume, Between the Woods and the Water, takes him through Hungary and Romania; together they capture better than any books I know the remedial, intoxicating joy of travel." — Thomas Swick, South Florida Sun-Sentinel

“Recovers the innocence and the excitement of youth, when everything was possible and the world seemed luminescent with promise. ...Even more magical...through Hungary, its lost province of Transylvania, and into Romania... sampling the tail end of a languid, urbane and anglophile way of life that would soon be swept away forever.” —Jeremy Lewis, Literary Review

“A book so good you resent finishing it.” —Norman Stone

"The greatest of living travel writers…an amazingly complex and subtle evocation of a place that is no more." — Jan Morris