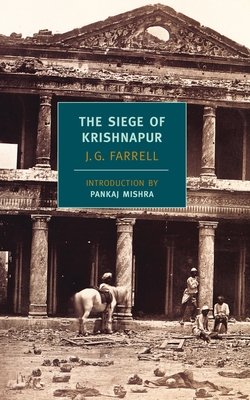 Farrell’s masterpiece, set during the Great Indian Mutiny of 1857, examines culture, class and race with insight, subtlety and wit. Farrell’s superb writing brings to life an historical event by creating memorable characters, action and suspense. One of my favorite novels. — Louise Jones

Winner of the Booker Prize. An insightful and thrilling novel about the British Empire in India during the Great Mutiny of 1857, as seen through the eyes of a young, love-struck idealist.

India, 1857—the year of the Great Mutiny, when Muslim soldiers turned in bloody rebellion on their British overlords. This time of convulsion is the subject of J. G. Farrell’s The Siege of Krishnapur, widely considered one of the finest British novels of the last fifty years.

Farrell’s story is set in an isolated Victorian outpost on the subcontinent. Rumors of strife filter in from afar, and yet the members of the colonial community remain confident of their military and, above all, moral superiority. But when they find themselves under actual siege, the true character of their dominion—at once brutal, blundering, and wistful—is soon revealed.

The Siege of Krishnapur is a companion to Troubles, about the Easter 1916 rebellion in Ireland, and The Singapore Grip, which takes place just before World War II, as the sun begins to set upon the British Empire. Together these three novels offer an unequaled picture of the follies of empire.

J.G.Farrell (1935–1979) was born with a caul, long considered a sign of good fortune. Academically and athletically gifted, Farrell grew up in England and Ireland. In 1956, during his first term at Oxford, he suffered what seemed a minor injury on the rugby pitch. Within days, however, he was diagnosed with polio, which nearly killed him and left him permanently weakened. Farrell’s early novels, which include The Lung and A Girl in the Head, have been overshadowed by his Empire Trilogy—Troubles, the Booker Prize–winning Siege of Krishnapur, and The Singapore Grip (all three are published by NYRB Classics). In early 1979, Farrell bought a farmhouse in Bantry Bay on the Irish coast. “I’ve been trying to write,” he admitted, “but there are so many competing interests–the prime one at the moment is fishing off the rocks… . Then a colony of bees has come to live above my back door and I’m thinking of turning them into my feudal retainers.” On August 11, Farrell was hit by a wave while fishing and was washed out to sea. His body was found a month later. A biography of J.G. Farrell, J.G. Farrell: The Making of a Writer by Lavinia Greacen, was published by Bloomsbury in 1999.

Pankaj Mishra was born in North India in 1969 and now lives in London and India. He is the author of The Romantics, winner of the Los Angeles Times‘s Art Seidenbaum Award for First Fiction, and An End to Suffering: The Buddha in the World. He is a frequent contributor to The New York Review of Books and The Guardian. His most recent book is Age of Anger: A History of the Present.

"Suspense and subtlety, humour and horror, the near-neighbourliness of heroism and insanity: it is rare to find such divergent elements being controlled in one hand and being raced, as it were, in one yoke. But Farrell manages just this here: his imaginative insight and technical virtuosity combine to produce a novel of quite outstanding quality."
— The Times (London)

"The magnificient passages of action in The Siege of Krishnapur, its gallery of characters, its unashamedly detailed and fascinating dissertations on cholera, gunnery, phrenology, the prodigal inventiveness of its no doubt also well-documented scenes should satisfy the most exacting and voracious reader. For a novel to be witty is one thing, to tell a good story is another, to be serious is yet another, but to be all three is surely enough to make it a masterpiece."
— John Spurling, The New Statesman

"…a masterpiece as unclassifiable as Giuseppe Lampedusa’s novel The Leopard or Penelope Fitzgerald’s novel, The Blue Flower. A historical novel, a comedy of manners, an intellectual history, an evocation of scene: It is all of these. But it is the inimitable combination of these ingredients that gives the book its perculiar savor."
— Columbus Dispatch