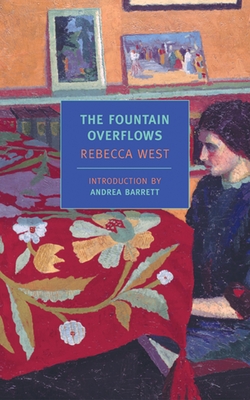 The lives of the talented Aubrey children have long been clouded by their father's genius for instability, but his new job in the London suburbs promises, for a time at least, reprieve from scandal and the threat of ruin. Mrs. Aubrey, a former concert pianist, struggles to keep the family afloat, but then she is something of a high-strung eccentric herself, as is all too clear to her daughter Rose, through whose loving but sometimes cruel eyes events are seen. Still, living on the edge holds the promise of the unexpected, and the Aubreys, who encounter furious poltergeists, turn up hidden masterpieces, and come to the aid of a murderess, will find that they have adventure to spare.

In The Fountain Overflows, a 1957 best seller, Rebecca West transmuted her own volatile childhood into enduring art. This is an unvarnished but affectionate picture of an extraordinary family, in which a remarkable stylist and powerful intelligence surveys the elusive boundaries of childhood and adulthood, freedom and dependency, the ordinary and the occult.

Rebecca West (1892-1983) was born Cicily Isabel Fairfield, the youngest of three daughters of Charles Fairfield, a journalist in London, and Isabel Mackenzie, a talented pianist who supported her family by giving music lessons. Fairfield was a brilliant storyteller who entertained his daughters with tales of wild adventures in America and Australia, but he was moody and unreliable, and in 1901 he left his wife and children to go to Sierra Leone, where he hoped to start a pharmaceutical plant. The plan failed, and he returned to London, though not to his family, dying when Cicily was fourteen. Inspired by such stars of the stage as Sarah Bernhardt and Mrs. Patrick Campbell, Cicily hoped to become an actress, and in 1910 she enrolled in the Academy of Dramatic Art. Soon, however, she abandoned her theatrical ambitions and joined the staff of the feminist journalThe Freewoman, for which she began to write regularly under the name of Rebecca West (adopted after playing that character in a performance of Ibsen’s Rosmersholm). Among Rebecca West’s protean accomplishments are critical studies of two writers she deeply admired, Henry James and D.H. Lawrence;Black Lamb and Grey Falcon (1941), a vast work about pre-World War II Yugoslavia that combines history, political analysis, and vivid descriptions of travel; The Meaning of Treason (1947); and several novels, beginning with The Return of the Soldier (1918) and including The Fountain Overflows(1956), which is closely modeled on the events of her own childhood.

Andrea Barrett is the author of five novels, most recently The Voyage of the Narwhal, and two collections of short fiction, Ship Fever, which received the 1996 National Book Award, andServants of the Map. A MacArthur Fellow, she was also a Fellow at the Center for Scholars and Writers at the New York Public Library.

"Rebecca West was one of the giants and will have a lasting place in English literature. No one in this century wrote more dazzling prose, or had more wit, or looked at the intricacies of human character and the ways of the world more intelligently." —William Shawn

"A real Dickensian Christmas pudding of a book-full of incident, full of family delights, full of parties and partings, strange bits of London, the lobby of the House of Commons, a classic murder with portraits of the murderer, the murderee and a couple of innocent bystanders, bill collectors, kitchen fires, good food, and a considerable quota of ghosts. West’s is a world that is a delight to enter and to live in, warm and vital, and constantly entertaining." —Elizabeth Janeway, The New York Times Book Review