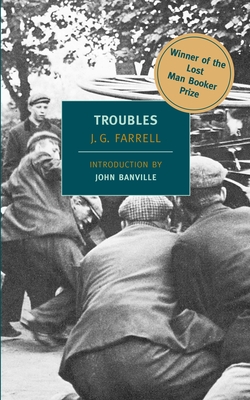 At the end of WWI, Brendan Archer returns to Ireland to visit his fiancee, whose family owns a hotel which, like the British Empire, is on the verge of internal collapse, while the IRA menaces outside. Forty years ago this rich, ironic, splendid book was nominated for the Booker Prize, but the committee changed the rules and all 1970 publications were eliminated. Now - 40 years later - the award has come through and Troubles has deservedly won it. Farrell also received the 1973 Booker for his superb The Siege of Krishnapur. Two of my favorite novels.

Winner of the Lost Man Booker Prize, this darkly hilarious book about the Irish war for independence takes place in a crumbling hotel on Ireland's west coast, a place where madness and brutality have begun to reign.

1919: After surviving the Great War, Major Brendan Archer makes his way to Ireland, hoping to discover whether he is indeed betrothed to Angela Spencer, whose Anglo-Irish family owns the once-aptly-named Majestic Hotel in Kilnalough. But his fiancée is strangely altered and her family's fortunes have suffered a spectacular decline. The hotel's hundreds of rooms are disintegrating on a grand scale; its few remaining guests thrive on rumors and games of whist; herds of cats have taken over the Imperial Bar and the upper stories; bamboo shoots threaten the foundations; and piglets frolic in the squash court. Meanwhile, the Major is captivated by the beautiful and bitter Sarah Devlin. As housekeeping disasters force him from room to room, outside the order of the British Empire also totters: there is unrest in the East, and in Ireland itself the mounting violence of "the troubles."

Troubles is a hilarious and heartbreaking work by a modern master of the historical novel.

J.G.Farrell (1935–1979) was born with a caul, long considered a sign of good fortune. Academically and athletically gifted, Farrell grew up in England and Ireland. In 1956, during his first term at Oxford, he suffered what seemed a minor injury on the rugby pitch. Within days, however, he was diagnosed with polio, which nearly killed him and left him permanently weakened. Farrell’s early novels, which include The Lung and A Girl in the Head,have been overshadowed by his Empire Trilogy—Troubles, the Booker Prize–winning Siege of Krishnapur, and The Singapore Grip (all three are published by NYRB Classics). In early 1979, Farrell bought a farmhouse in Bantry Bay on the Irish coast. “I’ve been trying to write,” he admitted, “but there are so many competing interests–?the prime one at the moment is fishing off the rocks… . Then a colony of bees has come to live above my back door and I’m thinking of turning them into my feudal retainers.” On August 11, Farrell was hit by a wave while fishing and was washed out to sea. His body was found a month later. A biography of J.G. Farrell, J.G. Farrell: The Making of a Writerby Lavinia Greacen, was published by Bloomsbury in 1999.

John Banville was born in Wexford, Ireland, in 1945. He is the author of many novels, including The Book of Evidence, The Untouchable, and Eclipse. Banville’s novel The Sea was awarded the 2005 Man Booker Prize. His most recent book is Mrs. Osmond. On occasion he writes under the pen name Benjamin Black.

We find in Farrell’s novels links between the depicted colonial past and the postcolonial present that yield an abundance of ironies and ambiguous parallels. —Ivan Kreilkamp,​ Public Books

Farrell wrote superbly; all his books had a quality that hallmarks great literary talent—he could “do” texture. This album—which is what Troubles feels like—records the same Anglo-Irish as Elizabeth Bowen knew and belonged to. As with Bowen, this feels like the real thing (which is all a novel has to do). Always judge a writer by his grasp of what he doesn’t know: Farrell died young yet his old people are almost his best creations.
— Frank Delaney, The Guardian