The Voyage of the Dawn Treader (Compact Disc) 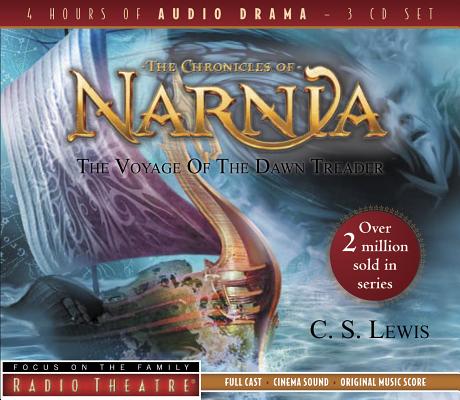 Fully dramatized and produced with cinema-quality sound design and music, each title in Radio Theatre's Chronicles of Narnia is now available in a travel-friendly size. Hosted by Douglas Gresham, stepson of C. S. Lewis, these timeless classics have mesmerized millions around the world. Upon entering an enchanted world called Narnia, four ordinary children learn extraordinary lessons in courage, self-sacrifice, friendship, and honor. Brought to life in London by a cast of more than 100 actors, including award-winners Paul Scofield, David Suchet, and Ron Moody, the 7-part Chronicles of Narnia provides over 22 hours of exhilaring listening entertainment.

Voyage of the Dawn Treader: Join Lucy, Edmund, and Eustace on an exciting sea voyage that will take you to an encounter with a gigantic sea serpent, to a land of darkness where nightmares come true, and even to an island where a boy is turned into a dragon This is a faithful adaptation of the classic Chronicles of Narnia novel by C. S. Lewis. Recorded in London with some of England's finest actors, it includes film-style sound effects and a rich musical score.