Obscene in the Extreme: The Burning and Banning of John Steinbeck's The Grapes of Wrath (Paperback) 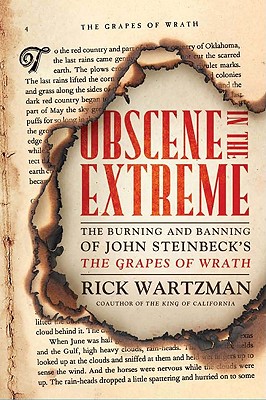 A gripping account of the furor that surrounded the publication of Steinbeck's towering novel about the Great Depression. The book was especially denounced in Kern County, California, a pivotal setting in the novel, where officials tried to ban the book from the public libraries, igniting a firestorm of controversy that stretched across the country. — Alden Graves

Few books have caused as big a stir as John Steinbeck's The Grapes of Wrath, when it was published in April 1939. By May, it was the nation's number one bestseller, but in Kern County, California -- the Joads' newfound home -- the book was burned publicly and banned from library shelves. Obscene in the Extreme tells the remarkable story behind this fit of censorship.

When W. B. "Bill" Camp, a giant cotton and potato grower, presided over its burning in downtown Bakersfield, he declared: "We are angry, not because we were attacked but because we were attacked by a book obscene in the extreme sense of the word." But Gretchen Knief, the Kern County librarian, bravely fought back. "If that book is banned today, what book will be banned tomorrow?"

Obscene in the Extreme serves as a window into an extraordinary time of upheaval in America -- a time when, as Steinbeck put it, there seemed to be "a revolution . . . going on."

Rick Wartzman is director of the KH Moon Center for a Functioning Society at the Drucker Institute, a part of Claremont Graduate University. He also writes about the world of work for Fortune magazine online. Before joining the Drucker Institute in 2007 as its founding executive director, Rick worked for two decades as a reporter, editor and columnist at the Wall Street Journal and Los Angeles Times. While business editor of the Times, he helped shape a three-part series on Wal-Mart's impact on the economy and society, which won the 2004 Pulitzer Prize for National Reporting.