After the Wall: Confessions from an East German Childhood and the Life that Came Next (Paperback) 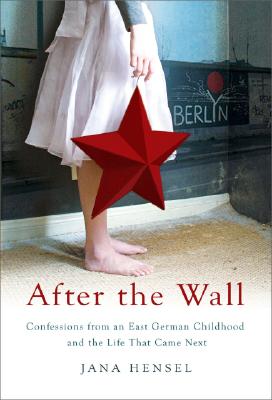 Jana Hensel was thirteen on November 9, 1989, the night the Berlin Wall fell. In all the euphoria over German reunification, no one stopped to think what it would mean for Jana and her generation of East Germans. These were the kids of the seventies, who had grown up in the shadow of Communism with all its hokey comforts: the Young Pioneer youth groups, the cheerful Communist propaganda, and the comforting knowledge that they lived in a Germany unblemished by an ugly Nazi past and a callous capitalist future.

Suddenly everything was gone. East Germany disappeared, swallowed up by the West, and in its place was everything Jana and her friends had coveted for so long: designer clothes, pop CDs, Hollywood movies, supermarkets, magazines. They snapped up every possible Western product and mannerism. They changed the way they talked, the way they walked, what they read, where they went. They cut off from their parents. They took English lessons, and opened bank accounts. Fifteen years later, they all have the right haircuts and drive the right cars, but who are they? Where are they going?

In After the Wall, Jana Hensel tells the story of her confused generation of East Germans, who were forced to abandon their past and feel their way through a foreign landscape to an uncertain future. Now as they look back, they wonder whether the oppressive, yet comforting life of their childhood wasn't so bad after all.

Jana Hensel was born in Leipzig, East Germany, in 1976. She is currently a freelance journalist living in Berlin. After the Wall, published in German under the title Zonenkinder, was a major bestseller in Germany.

Jefferson Chase has previously translated The Culture of Defeat by Wolfgang Schivelbusch and Death in Venice and Other Stories by Thomas Mann. A journalist and writer, he lives in Berlin.