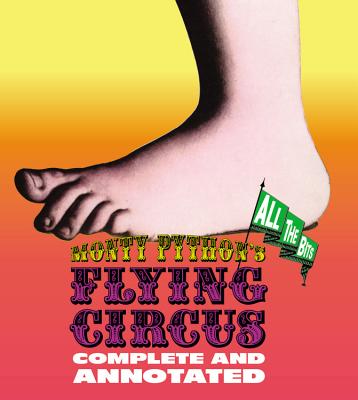 Six pounds of Pythony greatness! A must for die-hard fans and a perfect way to introduce the troupe to the uninitiated. — Sarah Donner

Available for the first time in paperback, Monty Python's Flying Circus: All the Bits includes every script from every episode of the innovative, hilarious, and absurd series--one of the most influential of all time--plus hundreds of annotations, behind-the-scenes stories, profiles, and more, as well as photographs, drawings, and Terry Gilliam's iconic artwork.

Monty Python's Flying Circus is one of the most popular, important and oft-quoted comedy series of all time. Python's influence on comedy has been compared to the Beatles' influence on music. This landmark work collects the complete scripts for every one of the 45 episodes of Flying Circus: every silly setup, every clever conceit, every snide insult, and ever saucy aside from these classic skits, including "The Ministry of Silly Walks," "The Dead Parrot," "Banter in the Cheese Shop," "Spam, the Funniest Joke in the World," "The Spanish Inquisition," "The Argument Clinic," "The Fish-Slapping Dance," "The Lumberjack Song," and all the rest.

Every script is thoroughly annotated with notes that cover the plethora of cultural, historical, and topical references touched upon in each sketch. Sidebars and commentary throughout include profiles of the principles -- Graham Chapman, Eric Idle, Terry Jones, Michael Palin, Terry Gilliam, and John Cleese -- fascinating facts about technical concerns, set design, and shooting locations; insider stores from on and off the set, including arguments, accidents, and practical jokes; goofs and gaffes; and much more. Also included are thousands of stills and artwork from the shows.

Luke Dempsey is an executive editor at HarperCollins, and the author of A SUPREMELY BAD IDEA and CLUB SOCCER 101. He lives in Brooklyn, NY.

Characterized by a level of detail that firmly plants Dempsey (A Supremely Bad Idea), the deputy editor of Bookish.com, in the obsessive fan-boy camp, this annotated transcription of all 45 Monty Python episodes occupies a ludicrously colorful and silly space between scrapbook and bible of the absurd. Including stills of more than 2,000 key scenes, as well as a litany of trivia for each sketch, this is a perfect supplement to the British troupe's subversive comedic oeuvre. Dempsey keeps his comments and criticism to the margins of the page, allowing classic sketches like "Dead Parrot," "The Ministry of Silly Walks," and "The Lumberjack Song" to speak for themselves. But it's in those margins that readers will likely find the most gold, as Dempsey's running commentary covers everything from expected Python minutiae, gaffes, and in-jokes, to British history and culture, effectively situating the show's crisp writing and sly references in their proper context. Clocking in at nearly 900 pages, folks won't be toting this book far from the coffee table, but the engaging combination of asides, fun facts, illustrations, and screen shots (not to mention the episode transcriptions themselves) make for an immersive and addictive read; Python fans needn't look any further?it's all here, literally.