Object Oriented: An Anthology of Supreme Accessories from 1994-2018 (Hardcover) 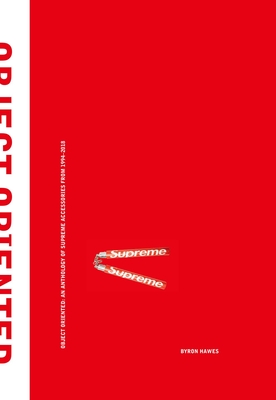 A complete anthology of 25 years of Supreme's accessories, Object Oriented is a never-before-seen comprehensive study of the New York skate brand's ongoing collaborative foray into the world of object design.

Noted design critic Byron Hawes traces the history of Supreme's industrial design objects, from cheeky early objects like a skate tool that moonlights as a pipe and a low-key Fuck Tha Police branded tallboy paper bag through to notable collaborations with the likes of Spalding, Louisville Slugger, Everlast, and more, positing a theory that 'Preme's design output is actually a highly curated alt-design museum, proposing an ongoing series of highly important and overlooked quotidian industrial design icons. Examples include a Lezyne bike pump, Master combination locks, Box Logo Buck knives, a Braun alarm clock, Maglites, a Kidde Fire Extinguisher, and the ever controversial brick; design icons all, though not typically mentioned in the same conversation as other iconic pieces of 20th century industrial design.

Featuring conversations with noted collectors and designers, as well as original photography of the only known complete collection of Supreme accessories and stickers, Object Oriented is the only complete survey of a cultural phenomenon.

Byron Hawes is a New York-based writer and designer. He is the founder and editor of the underground design magazine The Après Garde, and a co-founder of I-V, a boutique architecture and design firm that has done projects including a recording studio and offices for OVOsound, and Campari's Canadian HQ.

He currently serves as a contributing editor for Hypebeast, Sidewalk Hustle, and Fucking Young and senior editor for Flofferz, and was previously a consulting editor at Architectural Digest China and HighSnobiety and Greater China Editor for BlackBook Magazine, as well as having contributed to publications including Monocle, Vice, Wallpaper, and Azure.

Additionally, he has authored or co-authored the books Drop, We are Wanderful: 25 Years of Design & Fashion in Limburg, Post Industrial Brutalism and the Daiquiri, Modern Tropical: Houses in the Sun, Façades: A Visual Compendium of Modern Architecture, and others.