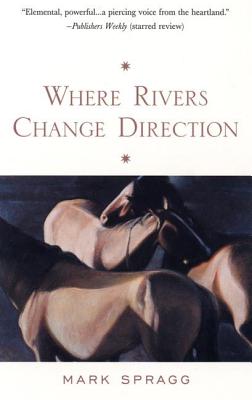 Whether you like nature essays, writing about the West, or literary memoirs, this collection of essays may well knock you out, which is precisely what it did to me.

Spragg grew up on the oldest dude ranch in Wyoming and to say that he writes eloquently about his coming of age is as vast an understatement as the Shoshone wilderness in which he learned to cowboy. There are essays about the ovenight elk hunt on which the young Spragg had to bind his mentor's grisly knife wound miles from civilizaiton, buying his first horse with his father, riding a sick horse nearly to death (and his resulting shame), and tracking a shot bear through the woods at night only to wonder who was tracking whom as the hours wore on. The last two essays, by a much older Spragg, are stunners. In one, he teaches the 8 year old son of a friend to shoot a rifle, which leads to a beautiful piece of writing entwining his musings about the origins of gun violence and his love for this little boy (whom he calls "The Viking".) The last piece, almost unbearably sad, is about his mother who is dying of emphysema, and how he and his brother care for her. Mark Spragg is a hugely talented writer whom I believe should be famous someday. If and when, his novel comes out, get out of my way. — Stan Hynds

It is a voice that echoes off canyon walls, springs from the rush of rivers, thunders from the hooves of horses. It belongs to award-winner Mark Spragg, and it's as passionate and umcompromising as the wilderness in northwest Wyoming in which he was born: the largest block of unfenced wilderness in the lower forty-eight states. Where Rivers Change Direction is a memoir of childhood spent on the oldest dude ranch in Wyoming—with a family struggling against the elements and against themselves, and with the wry and wise cowboy who taught him life's most important lessons.

As the young Spragg undergoes the inexorable rites of passage that forge the heart and soul of man, he channels Peter Matthiessen and the novels of Ernest Hemingway in his truly unforgettable illuminations of the heartfelt yearnings, the unexpected wisdom, and the irrevocable truths that follow in his wake.

Mark Spragg is the award-winning author of the memoir Where Rivers Change Direction, winner of the 2000 Mountains & Plains Booksellers Award, and the novels The Fruit of the Stone, An Unfinished Life, and Bone Fire. His books have been translated into fifteen languages.

“A vivid portrait of life in the American outback.” –San Francisco Chronicle

“A discovery… what makes the book so affecting is that everything is approached with a boy’s generous and unwearied heart.” –Big Sky Journal

“The cruel, punishing sound of the wind; the rich, earthy smell of horses; the bitter joy of boy becoming man—Spragg’s spare but sensual essays will resonate not only with males and horse lovers, but also with anyone who treasures an examined life.” –Utne Reader

“A piercing voice from the heartland, this resonant autobiography weds the venerable Western tradition of frontier exploration of self and nature with the masculine school of writing stretching from Hemingway to Mailer.” –Publishers Weekly

"This is a book that deserves many readers." –Larry McMurty

"Here is a book for women to read to learn the hearts of men. Here is a book for men to read to curse what they have lost. This soulful book walks us to a place of restoration through the big wide open of Wyoming. Mark Spragg's words, his stories are a fine example of blood writing, every sentence alive." –Terry Tempest Williams