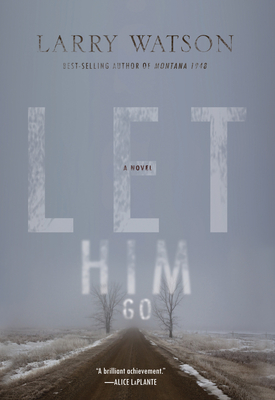 By Larry Watson
$16.00
Click Title for IN STOCK Location

I was hooked from the first page. Set in north Dakota and Montana in 1959, this compact novel delivers a portrait of marriage, a child in peril, superbly crafted villains, and a fascinating cast of characters met along the way. Spare... but absolutely brimming. — Stan Hynds

“Stunning! Riveting! Like far-off black clouds with the faint sound of thunder on the horizon, Let Him Go crescendos into a violent northern Plains thunderstorm as grandparents George and Margaret Blackledge set out on a journey to”
— Nancy Simpson-Brice, The Book Vault, Oskaloosa, IA

Now a Major Motion Picture from Focus Features, Starring Kevin Costner and Diane Lane
Winner of the Montana Book Award
A September 2013 Indie Next List Pick
A Midwest Connections Pick
Named a "Best Book of 2013" by Esquire and Booklist The celebrated author of Montana 1948 returns to the American West in this riveting tale of familial love and its unexpected consequences. Dalton, North Dakota. It's September 1951: years since George and Margaret Blackledge lost their son when he was thrown from a horse; months since his widow left with their only grandson and married another man. Margaret is resolved to find and retrieve her beloved grandson, while George, a retired sheriff, is none too eager to stir up trouble. Unable to sway his wife from her mission, George takes to the road with Margaret by his side, traveling through the Badlands to Montana. But when Margaret tries to bring little Jimmy home, the Blackledges find themselves entangled with the Weboy clan, who are determined not to give up the boy without a fight. Pitch-perfect, gutsy, unwavering, and "both restrained and exquisite" (Chicago Tribune), Larry Watson is at his storytelling finest in this unforgettable return to the American West.

The author of many novels, including Montana 1948 and Orchard, Larry Watson is the recipient of the Milkweed National Fiction Prize, among numerous other prizes and awards. He teaches writing and literature at Marquette University and lives in Milwaukee.