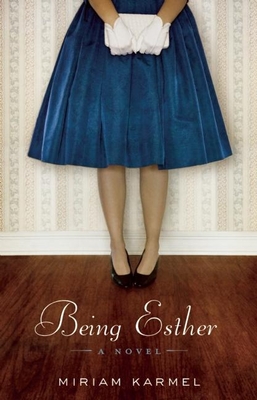 A wonderful portrait of a seemingly simple life reimagined from Esther's last serene days. The details of her "modest" existence take on a brilliance and clarity, which allow Esther to become alive and loveable to the reader. — Karen Frank

A wonderful fiction debut, Being Esther gives voice to Esther Lustig, an extraordinary woman who has lived a conventional life, in this touching exploration of aging and its accompanied search for meaning. In spare, refreshingly unsentimental prose, Miriam Karmel has given us one of literature's finest portraits of the last months of a woman's life. At once sad and amusing, unpretentious and ambitious, Karmel's fiction debut brings understanding and tremendous empathy to the character of Esther Lustig, a woman readers will recognize and embrace. Born to parents who fled the shtetl, Esther Lustig has led a seemingly conventional life--marriage, two children, a life in suburban Chicago. Now, at the age of eighty-five, her husband is deceased, her children have families of their own, and most of her friends are gone. Even in this diminished condition, life has its moments of richness, as well as its memorable characters. Being Esther is an exploration of aging, a search for meaning, and about the need, as Esther puts it, for better roadmaps for growing old.

Miriam Karmel has worked professionally as a newspaper reporter and magazine editor, and most recently as a freelance writer specializing in medicine and health. Her journalism has appeared in AARP magazine and for many years in Minnesota Women's Press. Her fiction has won numerous regional prizes, and her stories have been published in Bellevue Literary Review, Minnesota Monthly, as well as anthologized in Milkweed's Fiction on a Stick (2008). She lives in Minneapolis, MN and Sandisfield, MA. Being Esther is her first novel. Finding the right container by Miriam Karmel I've always been a writer. I produced my first awkward efforts on my parents' clunky old Royal. It was a heavy, metal machine with a black-and-red striped ribbon and fat, pearly keys. I couldn't yet read, but I loved pounding the keys, then ripping the paper from the roller and showing it off to my mother. I'd like to think that she praised me for all that gibberish. Or perhaps my random jottings were as remarkable as those of the chimpanzee who types Shakespeare by chance. What does it matter? Gibberish or Shakespeare, I loved putting words on paper. Later, I wrote letters to friends at summer camp. I was stuck at home with parents who didn't "believe" in camp, as if going away for the summer was a matter of faith. I entertained myself by writing what I believed were hilarious dispatches from the home front. I advanced to reporting for a newspaper, where I had a regular beat. And I wrote for magazines. Over the years, I've written op-ed pieces and essays, short stories and even poems, though I am not a poet. Being Esther began as a short story called "Bingoville." It starts with a passage describing the way Esther and her friend Lorraine check in with each other every morning by phone. After I finished the story, I couldn't stop thinking about Esther. How does she spend her days? What does she eat for breakfast? What are her fears? What does she wear? What does she think about this thing or that? What did she do when she was young? I couldn't let go. Every story, fact or fiction, needs a container. Poets know that best. They seek a particular form to contain their words. Ode. Sonnet. Free verse. Sestina. Haiku. Or sometimes the poet adheres to a form as a way of opening up new possibilities or new territories for expression. Either way, form is chosen with intention. The story I wanted to tell, about an old woman coming to terms with the meaning of her life, felt right as fiction. "Bingoville," the original Esther story, was contained in the short form. When I realized that I wasn't finished with Esther, I knew that I needed a larger container. I wrote a novel. I could have done otherwise. I could have interviewed gerontologists and psychologists, older people and the children of older people, then packaged all my findings into a magazine article, with some irksome title like, "Growing Old Ain't for Sissies." The article might even begin with an anecdote about an older woman, like Esther, who calls a friend every morning to ensure that each has made it through another night. The article would go on to offer advice from experts on how to talk to mom about giving up the car keys or how to keep mom safe in her own home. There'd be a sidebar: 10 Tips for Staying Independent. That story would be practical and informative. But it wasn't the story I wanted to tell. I wanted to write about what it feels like to be old. I wanted to write about the struggle to maintain one's dignity as the body, and sometimes the mind, defeats us. I did research, of course. I read books on aging. I read the diaries of older women. I listened to friends' stories about how they were dealing with aging parents. Some of that found a way into Being Esther. I made it up! Being Esther is my invention. I don't know anyone exactly like Esther Lustig. And I don't know what it feels like to be very old. Fiction gave me the license to explore that feeling. I was free to inhabit the body of an old woman, to feel what it is like to be Esther. I've been asked how I came to fiction after a long career in journalism. I haven't at long last arrived at fiction. I simply chose to tell a story in a different form. Perhaps in my dotage, I'll be pounding the keys again, producing reams of gibberish. For now, it feels good to know that I could tell a story in novel form.

"Being Esther is a small masterpiece, every detail unerring. I wanted Esther to move in next door so we could play two-hand bridge and mix drinks with names like South Side Sling or Not Your Aunt Nellie. I would coax her to tell me about the boys before Marty and about the Starrlights. In Esther, Miriam Karmel has created a character one will never forget nor ever stop loving..."
Faith Sullivan, author of The Cape Ann and Gardenias