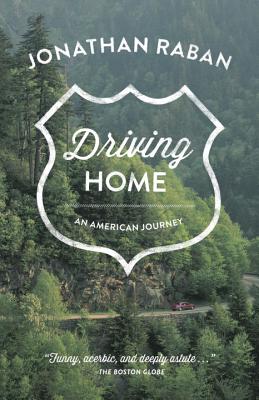 Like a cousin of Christopher Hitchens and Bill Bryson, Raban is a witty, erudite traveler who sees the things others tend to miss. This essential essay collection is a penetrating portrait of America. — Charles Bottomley

For more than thirty years, Jonathan Raban has written with infectious fascination about people and places in transition or on the margins, about journeys undertaken and destinations never quite reached, and, as an expat, about what it means to feel rooted in America. Spanning two decades, Driving Home charts a course through the Pacific Northwest, American history, and current events as witnessed by "a super-sensitive, all-seeing eye. Proving that an outsider is the keenest observer of the scene that natives take for granted, this collection of Jonathan Raban’s essays affirms his place as the most literate, perceptive, and humorous commentator on the places, characters, and obsessions that constitute the American scene. Raban spots things we might otherwise miss; he calls up the apt metaphors that transform things into phenomena. "He is one of our most gifted observers." (Newsday).

Jonathan Raban is the author, most recently, of the novels Surveillance and Waxwings; his nonfiction includes Passage to Juneau and Bad Land. His honors include the National Book Critics Circle Award, the PEN/West Creative Nonfiction Award, the Pacific Northwest Booksellers' Award, and the Governor's Award of the State of Washington. He lives in Seattle.

“It was EB White who said: ‘An Englishman is not happy until he has explained America.’ Jonathan Raban ought to be very happy on this score, because his Driving Home explains the State of the Union, and Raban continues to be the most resourceful refugee on our shores.”
Paul Theroux, The Guardian, UK

“With his characteristic curiosity and his insatiable desire to drink as deeply as he can from the wells of landscape or literature, Raban once again vividly captures the experience of trying to make a home in a place that he continues to find fascinating, bizarre, ugly, beautiful, repellent, and generous.”
Publishers Weekly

“Full of ideas that move through the language with the grace of a well-captained sailboat.”
Kirkus Reviews

"Describing how Raban left England two decades ago for a new life in Seattle, these essays offer agile readings of the landscape, literature and politics, 'along with some backward glances to England,' he writes, which 'may betray a lurking nostalgia for a soci­ety more settled in its shape, more instinctively known, than the one I live in now.'"
The New York Times, Paperback Row

“Raban knows the best essayist trusts in drift and digression and habitually adds a literary trill. He is an erudite but adaptable companion, tart and genial, promiscuous in experience yet reliable in temperament…He conjures with his new home, with the Pacific Northwest, with history, poetry, geography, catastrophe…subjects Raban circumnavigates with finesse, shrugging off the obvious and regularly landing us on a shore we can’t quite glimpse from here.”
Stacy Schiff, The New York Times Book Review

“Raban writes with characteristic ease and insight…[describing], among other things, his attempts to get to know his adopted home and its warring tribes.”
The New Yorker

“…Raban achieves the perfect blend of the historical, observational and personal for which so many strive. … I loved this book.”
Sara Wheeler, The Literary Review, Edinburgh

“Raban is at his best when treating the people, landscapes and cultures through which he is passing as if they were works of art: holding up absurdities to patient inspection, digging into their histories, forcing the complacent and skeptical to acknowledge hidden beauties….Phrase-making wit is much in evidence through these pages, and there is something refreshing about a first-rate writer whose stories are literate and sophisticated but never self-consciously ‘literary.’…He knows how to capture the truth of a thing without saying it.”
Barton Swaim, The Wall Street Journal

“Raban opens the mind’s eye with ease….This ‘American Journey’ is the work of a fine example of that rapidly disappearing species, the man of letters.”
Carlo Wolff, Pittsburg Post-Gazette

“It’s a quest that Raban approaches, in these essays, with the full force of his remarkable talent, infused with the profound intellectual ease and quiet authority that only a writer with so much steadying ballast of good work as Raban has could muster. …. In 604 pages, not a dull moment. How does he do it?”
Melanie McGrath, The Evening Standard, London

"This Englishman in America is weird, unfettered, scruffy, alive... Mr. Raban’s best writing, which is most of it, is succulent under a crusty exterior, like a fish baked in salt. His stuff is yet more proof that Britons are better travel writers and essayists than Americans: drier, funnier, more argumentative."
Dwight Garner, The New York Times

“The essays collected in Driving Home do an excellent job of fleshing out the manifold conflicts—indeed violence—of the American landscape, but in the end, the dream of psychic renewal remains elusive, in large part because it is hard not to feel that the America of the past two decades, which Raban chronicles so carefully, no longer offers a sense of utopian possibility to the intelligent European mind, and Jonathan Raban is nothing if not an intelligent European mind.”
Adam Bresnick, The Times Literary Supplement, London

“…the elegance, wit, intensity - and research - behind Raban’s work demands that the reader follow the path towards Empsonian clarity.”
Nigel Fountain, Oldie, UK

“Driving Home isn't just a good read, it's a bunch of good reads. It's a book of important, smart work from a terrific writer who will both blow you away, and make you want to argue with him.”
Knute Berger, Crosscut, Seattle

"Raban [here] showcases his craftsmanship as a writer and his bona fides as an intellectual. Every word is impeccably chosen, every metaphor meticulously selected... [His] virtues as a writer are virtually unrivaled when it comes to explaining our relationships with landscape and nature, and he’s unrivaled, period, when describe water in all its forms, be it a placid puddle or a storm-swirled sea."
Phil Campbell, Columbia Journalism Review

“The central work of Raban’s life must be described as an effort to determine what America is like… But along with that, the reader notes, big water draws from Raban a kind of genius for natural description.”
Thomas Powers, The New York Review of Books

“His prevailing voice is one of reason, civilised discourse and elegant analogy. The rational lucidity, trimmed of overt passion or ferocity, makes the rare emotional outburst more potent.”
Herald Scotland

“…Raban provides his own peculiar and precise critique of the land he now calls home, full of cultural and historical observation and littered with his own dry, droll humour. The result is a must-read for fans of the writer, and a fine, if full, aside for fans of the USA.”
James Innes Williams, Traveler, UK

“Here is another, and welcome, addition to a genre that is best described as the literature of American encounter… It’s hard to think of another writer who combines such a gift for the description of physical place with a deep, analytical intelligence.”
The National, UAE

“Driving Home is a big book but it reads as if it’s a short, anecdotal history of the United States from 1990 to 2000, and if you have never read a book by Raban this is a good place to begin.”
The Spectator, London

“Jonathan Raban writes about water in the way that Barry Lopez writes about snow or Wilfred Thesiger wrote about sand: it's not always in the foreground of his observation, but you can sense his natural element in his whole way of seeing. …  [Driving Home] is also an autobiography of sorts, a memoir of the years since Raban cast himself adrift from Britain and washed up in Seattle.”
The Guardian, UK

“The true Raban touch here is that he brings his deep reading of American history to play, and manages to interweave his personal journey with essays on the explorers Lewis and Clark, who made a similar journey at the request of President Jefferson. It takes a passionate history buff to note how many of America’s virtues and vices have been present since independence and before, and a skilled raconteur to make us feel that passion. It’s a fine ride.”
Kevin Jackson, The Sunday Times, UK

“The master of the margins, Raban is an inspired observer and a natural writer. He has always understood the US, and since he left his native England to settle in Seattle he has never lost his understanding of the US or his outsider’s fascination with it. Six hundred pages of pleasure, including Last Call of the Wild.”
Eileen Battersby, Irish Times

"Driving Home is a pleasurably baggy collection from an acerbic, sometimes crusty writer, well suited to the nightstand."
Seattle Weekly

“A sterling collection….An incomparable travel writer, in this book Raban supplies myriad observations about his adopted home, but also on the larger American landscape, riffing on the West, urban architecture, national political trends, the dot-com economy, and most sublimely, about nature.”
David Takami, The Seattle Times