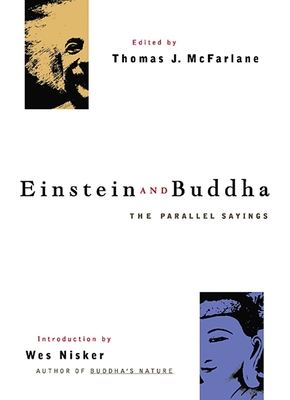 Drawing parallels between ancient philosophy and modern science through quotes, we can see how the two disciplines may not only be similar but possibly one in the same. With well over 1000 years between the lifetimes of the Buddha and Einstein, the connection is both fascinating and wondrous.

Provocative, stimulating, and insightful, Einstein and Buddha points to the far-reaching and profound parallels between Western scientific thought and Eastern religion. These remarkably similar disciplines touch on the essential nature of energy and matter, the relationship between subject and object, and the limits of language in understanding and describing reality. The shared understandings communicate a deep common ground on both the nature of the universe and our place in it.

Einstein:
"Our task must be to widen our
understanding and compassion to
embrace all living creatures and
the whole of nature in its beauty"
- Albert Einstein

Buddha:
"True happiness comes not
from a limited concern for one's
own well-being, but from developing
love and compassion for all sentient
beings"
- Dalai Lama

Einstein:
"The principle of science is the
following: The test of all knowledge
is experiment. Experiment is the sole
judge of scientific truth"
- Richard Feynman

Buddha:
"Personal experience is the foundation
of Buddhist philosophy. In this sense
Buddhism is a radical empiricism or
experimentalism"
- D. T. Suzuki

Einstein:
"Under typical conditions of ordinary
experience, each thing is seen as
relatively separate and related only
externally to other things"
- David Bohm

Einstein:
"The central recognition of the theory
of relativity is that geometry is a
construct of the intellect"
- H. Margenau

Buddha:
"Space is nothing but a mode of
particularization and has no real
existence of its own. Space exists
only in realtion to our particularizing
consciousness"
- Dalai Lama