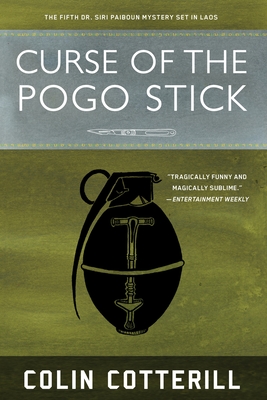 This is book number 5 in the A Dr. Siri Paiboun Mystery series.

“Dr. Siri Paiboun, the reluctant national coroner in post-revolution Laos, must deal with a curse (yes, a pogo stick curse) in this gem of a story from Cotterill, who brings Dr. Siri to life on the page so completely that we feel as if we would know him on the street, a man who is both a calm place in any storm and a trouble magnet.”
— Eric Robbins, Apple Valley Books, Winthrop, ME

Seven female Hmong villagers kidnap Dr. Siri on orders from the village elder who hopes that Yeh Ming, the thousand-year-old shaman who shares the doctor’s body, will consent to exorcise the headman’s daughter. He fears that her soul has been possessed by a demon due to the curse of a mysterious Western artifact. Siri agrees to help and, in so doing, brings to pass a prediction of Auntie Bpoo, a transvestite fortune-teller.

Colin Cotterill is the author of ten other books in the Dr. Siri Paiboun series: The Coroner’s Lunch, Thirty-Three Teeth, Disco for the Departed, Anarchy and Old Dogs, The Merry Misogynist, Love Songs from a Shallow Grave, Slash and Burn, The Woman Who Wouldn’t Die, Six and a Half Deadly Sins, and I Shot the Buddha. His fiction has won a Dilys Award and a CWA Dagger in the Library. He lives in Chumphon, Thailand, with his wife and five deranged dogs.

Praise for Curse of the Pogo Stick

"The adventure among the Hmong reveals Cotterill's real strength . . . The reason his series continues to be worth reading, is the author's deep understanding of these people and their beautiful, troubled land . . . Like Dr. Siri, Colin Cotterill has a touch of magic about him."
—The Boston Globe

"Cotterill’s approach in Curse of the Pogo Stick—so measured and offhand—actually achieves a remarkable feat: It cuts through all the never-again media saturation that genocidal regimes often generate, and it makes us take notice once more. We wind up caring about Cotterill’s characters, because they’re mostly either decent or at least understandably flawed and therefore human. By avoiding the nastiness and nihilism of noir, they reach a sympathetic, soulful reality writers rarely pull off."
—Paste Magazine

“Cotterill’s ironic pen [is] as sharp as ever.”
—Kirkus Reviews

“One of my favorite reluctant ‘detectives’ . . . Another delightful and intelligent read . . . Brilliant.”
—Crimespree Magazine