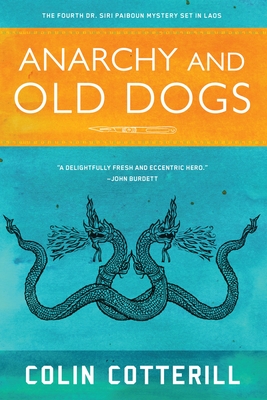 This is book number 4 in the A Dr. Siri Paiboun Mystery series.

When a blind former dentist is run over by a truck, Dr. Siri Paiboun, the reluctant national coroner of Laos, suspects that this was no traffic accident. A coded message in invisible ink is recovered from the dentist’s body, and Dr. Siri begins to follow clues that hint at deep—and dangerous—political intrigue. Dr. Siri only intended to investigate a murder; is he now being drawn into an insurrection? Will he, as a fortune teller predicts, betray his country?

Colin Cotterill is the author of nine other books in the Dr. Siri Paiboun series, including The Coroner’s Lunch, Thirty-Three Teeth, Disco for the Departed, and Six and a Half Deadly Sins. His fiction has won a Dilys Award and a CWA Dagger in the Library. He lives in Chumphon, Thailand, with his wife and six deranged dogs.

Praise for Anarchy and Old Dogs

“A series of terrifically beguiling detective novels . . . Whimsical, more personal stories that feature Siri and an equally memorable set of supporting characters . . . A wry, seasoned, off hand style that has been the secret weapon of this unexpectedly blithe and charming series.”
—Janet Maslin, The New York Times

"Cotterill’s portrait of his world gains depth and breath. Using a twisty mystery as a MacGuffin, he takes droll aim at the absurdities of recent history, all the more fascinating for their plausibility."
—Kirkus Reviews

“Think What’s Up, Tiger Lily with Mao taking over for Woody Allen.”
—Bloomberg.com

"You get a real feeling for what Laos was like in the '70s. The humor is wonderful, too—very subtle, very British."
—Kathy Reichs

"Humane and hilarious . . . The charmingly convoluted tale that results is good fun, better than most crime fiction."
—The Boston Phoenix