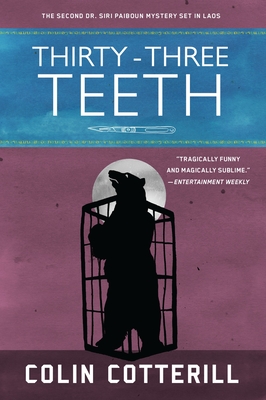 By Colin Cotterill
$16.95
Hard to Find - May no longer be available

This is book number 2 in the A Dr. Siri Paiboun Mystery series.

Dr. Siri Paiboun, one of the last doctors left in Laos after the Communist takeover, has been drafted to be national coroner. He is untrained for the job, but this independent seventy-two-year-old has an outstanding qualification for the role: curiosity. And he does not mind incurring the wrath of the party’s hierarchy as he unravels mysterious murders, because the spirits of the dead are on his side—and a little too close for comfort.

Dr. Siri performs autopsies and begins to solve the mysteries relating to a series of deaths by what seem to be bear bites, to explain why a government official ran at full speed through a seventh-story window and fell to his death, and to discover the origins of the two charred bodies from the crashed helicopter in the temple at Luang Prabang. As it turns out, not surprisingly, not all is peaceful and calm in the new Communist paradise of Laos.

Colin Cotterill is the author of nine other books in the Dr. Siri Paiboun series including The Coroner’s Lunch, Disco for the Departed, Anarchy and Old Dogs, and Six and a Half Deadly Sins. His fiction has won a Dilys Award and a CWA Dagger in the Library. He lives in Chumphon, Thailand, with his wife and five deranged dogs.

“Paiboun’s droll wit and Cotterill’s engaging plot twists keep things energetic; the rather grisly murders are offset by comedy . . . The elegant, elderly Paiboun seems an unlikely vehicle to carry a series . . . but he does so with charm and aplomb.”
—Entertainment Weekly

“Keeps a perfect balance between the modern mysteries of forensic science and the ancient secrets of the spirit world.”
—The New York Times Book Review

“The series neatly manages to include an engrossing mystery—political and folk history and a lot of sly satire.”
—Day to Day, NPR

“[Cotterill’s] second is as entertaining as his debut.”
—Kirkus Reviews, Starred Review