The Soul of a Tree: A Master Woodworker's Reflections (Paperback) 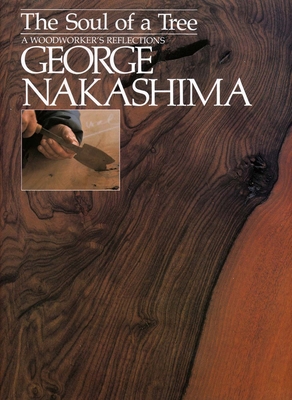 On a farmlike compound near New Hope, Pennsylvania, George Nakashima, his family, and fellow wood-workers create exquisite furniture from richly grained, rare timber. Tables, desks, chairs, and cabinets from this simple workshop grace the homes and mansions and executive boardrooms of people who prize such excellence. In this lavishly illustrated volume, George Nakashima allows us in intimate look at his artistry, his philosophy, his life. It is the portrait of an artisan who strives to find the ideal use for each plank in order to "create an object of utility to man and, if nature smiles, an object of lasting beauty."


The author's search for the meaning of life took him as a young man to Paris, Tokyo, and Pondicherry, India. In India, he found the inner peace for which he had been searching and began to find ways to work with timber. He writes movingly about the grandeur of ancient trees and stunning figured woods and explains how he selects and prepares his materials. Above all, he impresses us with his devotion to discovering the inherent beauty of wood so that noble trees might have a second life as furniture. The Soul of a Tree looks at the world through the eyes of an artist and evokes the joy of living in harmony with nature.

GEORGE NAKASHIMA, woodworker and architectural designer, is a native of Seattle, Washington. A graduate of MIT in architecture, he worked briefly in New York, then traveled to Paris, Tokyo, and India. It was while in Japan that he was sent on an extended architectural assignment to Pondicherry, India, where he designed Golconda, the primary disciples' residence at the Sri Aurobindo Ashram, which was his first major architectural project. Running a small integrated business near New Hope, Pennsylvania, since 1943, Mr. Nakashima's major commissions include furnishings for the country home of the late Gov. Nelson A. Rockefeller, Pocantico Hills, in Tarrytown, New, York, and interiors for Columbia University, Mt. Holyoke College, the International Paper Corporation, and the Monastery of Christ in the Desert, Abiquiu, New Mexico, for which he also provided the architectural design. Featured in such publications as Smithsonian, Town & Country, House Beautiful, Life, and Fine Woodworking, Mr. Nakashima has exhibited at many institutions including the Museum of Modern Art, New York; the Renwick Gallery, Washington, D.C.; the Nelson Gallery, Kansas City; and the Museum of Fine Arts, Boston. He was awarded the Gold Medal for craftsmanship by the American Institute of Architects in 1952, was named a Fellow of the American Craft Council in 1979, received the 1981 Hazlett Award, and in 1989 will be the first honoree in a series of major retrospective exhibitions of "America's Living National Treasures" at the American Craft Museum.


GEORGE WALD, Higgins Professor of Biology Emeritus at Harvard University, has been a close friend of George Nakashima for many years. He was co-recipient of the Nobel Prize in Physiology or Medicine in 1967 for his work on mechanisms of vision. He spends most of his time now in what he thinks of as "survival politics"—the sharp struggle to preserve life upon this planet: human, animal, and plant.

"From [Nakashima’s] tables and chairs flows the unadorned beauty of the rhythms of nature."—Smithsonian

"George Nakashima, the foremost master of the craft."—Time