The War: A Memoir (Paperback) 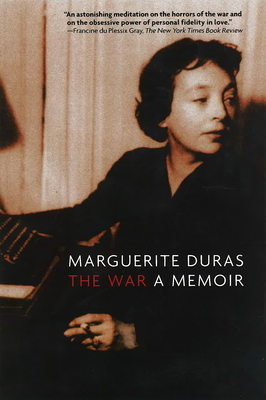 From the bestselling author of The Lover, Marguerite Duras's haunting memoir of suffering and survival in a time when Europe was torn asunder

Written in 1944 and first published in 1985, Duras's riveting account of life in Paris during the Nazi occupation and the first months of liberation depicts the harrowing realities of World War II-era France with a rich conviction enhanced by a] spare, almost arid, technique (Julian Barnes, The Washington Post Book World ). Duras, by then married and part of a French resistance network headed by Fran ois Mitterand, tells of nursing her starving husband back to health after his return from Bergen-Belsen, interrogating a suspected collaborator, and playing a game of cat and mouse with a Gestapo officer who was attracted to her. The result is more than one woman's diary . . . it is] a haunting portrait of a time and a place and also a state of mind (The New York Times).

Marguerite Duras (1914-1996) was one of France's most important literary figures. She is the author of such acclaimed novels as The Lover, The Ravishing of Lol Stein, and The Sailor from Gibraltar and wrote the screenplay for Hiroshima Mon Amour. The New Press has published translations of her books The North China Lover, The War, and Wartime Writings.