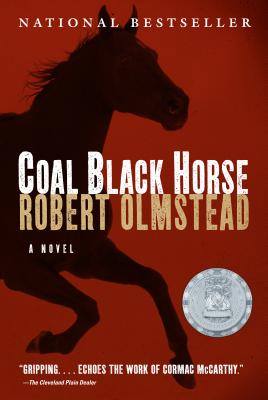 A woman, upon learning that Stonewall Jackson has been killed, tells her 14-year-old son to find his father and bring him home from the Civil War. After a perilous journey, the boy finds the man grievously wounded on the bloody fields at Gettysburg. Unforgettable tableaux of devotion, courage, and stark horror. The story is a simple one, but its reverberations are as timeless as the winds. Gripping reading, although this novel is not for the squeamish. — Alden Graves

“With its focus on choice and consequence, Coal Black Horse carries the reader across a battlefield that stretches from the Civil War to today. A young man wears a reversible coat of gray and blue -- a talisman from his mother to shield him from 'enemy' fire -- as he journeys to bring his father home, aided by the strength of the coal black horse. Olmstead's novel is both epic and personal, filled with beautiful writing about war's ugliness.”
— Charles Asher, Western AS Bookstore, Bellingham, WA

When Robey Childs's mother has a premonition about her husband, a soldier fighting in the Civil War, she does the unthinkable: she sends her only child to find his father on the battlefield and bring him home.

At fourteen, wearing the coat his mother sewed to ensure his safety—blue on one side, gray on the other— Robey thinks he's off on a great adventure. But not far from home, his horse falters and he realizes the enormity of his task. It takes the gift of a powerful and noble coal black horse to show him how to undertake the most important journey of his life: with boldness, bravery, and self-posession.

Coal Black Horse joins the pantheon of great war novels—All Quiet on the Western Front, The Red Badge of Courage, The Naked and the Dead.

Robert Olmstead is the author of eight previous books. Coal Black Horse was the winner of the Heartland Prize for Fiction. The Coldest Night was a finalist for the Dayton Literary Peace Prize. Far Bright Star was the winner of the Western Writers of America Spur Award. Olmstead is the recipient of a Guggenheim Fellowship and an NEA grant and is a professor at Ohio Wesleyan University.

“A spare, classical quest story . . . With a horse like this, you just want to ride, and with descriptive powers such as he displays here, Olmstead makes the ride an exciting one, with just enough lean prose to keep the mystery of an event both in time and out . . . and just the proper amount of sharp description to keep us bound to whatever piece of earth the particular moment of the story happens to be grounded in. . . . An effective mix of stark classic narrative and uncloying nostalgia.”
—San Francisco Chronicle