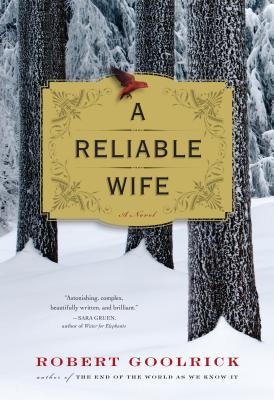 By Robert Goolrick
Call or email to see if a used copy is available.
Out of Print

Original and compelling. I found the characters unforgettable and authentic. The dark richness of the story did not suffer from the sparseness of the writing style but was in fact enhanced by it. The intensity was palpable but not horrifying, just achingly human. — Karen Frank

“This debut novel, set in the early 1900s, is a beautifully written psychological mystery, almost gothic at times. Advertising for 'a reliable wife,' Ralph Truitt, wealthy businessman, gets more than he realizes when Catherine Land steps off the train. Secrets on top of secrets, all revealed in Goolrick's lyrical prose in this a beautiful examination of love and regret.”
— Leslie Reiner, Inkwood Books, Tampa, FL

Rural Wisconsin, 1909. In the bitter cold, Ralph Truitt, a successful businessman, stands alone on a train platform waiting for the woman who answered his newspaper advertisement for "a reliable wife." But when Catherine Land steps off the train from Chicago, she's not the "simple, honest woman" that Ralph is expecting. She is both complex and devious, haunted by a terrible past and motivated by greed. Her plan is simple: she will win this man's devotion, and then, ever so slowly, she will poison him and leave Wisconsin a wealthy widow. What she has not counted on, though, is that Truitt — a passionate man with his own dark secrets —has plans of his own for his new wife. Isolated on a remote estate and imprisoned by relentless snow, the story of Ralph and Catherine unfolds in unimaginable ways.

With echoes of Wuthering Heights and Rebecca, Robert Goolrick's intoxicating debut novel delivers a classic tale of suspenseful seduction, set in a world that seems to have gone temporarily off its axis.

In addition to his most recent novel, The Fall of Princes, Robert Goolrick is the author of three other books: The End of the World as We Know It, a memoir; his first novel, A Reliable Wife, with sales of more than 1 million copies; and his second novel, Heading Out to Wonderful. He lives in Virginia.

“After breaking through with a disquieting memoir . . . Goolrick applies his storytelling talents to a debut novel, set in 1907, about icy duplicity and heated vengeance. . . . A sublime murder ballad that doesn’t turn out at all the way one might expect.” —Kirkus, starred review

“Debut novelist Robert Goolrick has managed a minor miracle. In the kind of precise, literary prose that breathes life into his complicated characters, Goolrick, author of an acclaimed memoir, has also managed a rousing historical potboiler, an organic mystery rooted in the real social ills of turn-of-the-century America. Whether writing about the farms of Wisconsin or the fleshpots of St. Louis, he re-creates a full-bodied, believable environment, and he peoples these worlds with characters as sensitive, as tortured as any contemporary souls. The result is a detailed exploration of love, despair, and the distance people can travel to reach each other that is as surprising, and as suspenseful, as any beach read.” -- Boston Globe

A “glittering, poisoned ice cube of a tale . . . Has a little of the Gothic feel of Daphne DuMaurier's Rebecca--complete with a dead first wife, suspicious housekeeper, and gorgeous mansion . . . A Reliable Wife is eminently readable and should delight fans of old-fashioned Gothic romances . . . Goolrick is a solid wordsmith, and he handily manages the impressive task of making readers care about a woman bent on cold-blooded murder. And generating the proper Gothic ambience in Wisconsin is no mean feat.” -- Christian Science Monitor

A "fierce and sophisticated debut novel . . . In its best moments, A Reliable Wife calls to mind the chilling tales of Poe and Stephen King, and at its core this is a tragedy of Shakespearean dimensions. It melds a plot drenched in suspense with expertly realized characters and psychological realism. The fate of those characters is in doubt right up to this relentless story’s intense final pages, and Goolrick’s ability to sustain that tension is a tribute to his craftsmanship and one of the true pleasures of a fine first novel." -- Bookpage

"A gothic tale of . . . smoldering desire. . . . The novel is deliciously wicked and tense, presented as a series of sepia tableaux, interrupted by flashes of bright red violence. . . . Once you've fallen into the miasma of A Reliable Wife, it's intoxicating." –Washington Post

"A gothic tale of . . . smoldering desire . . . The novel is deliciously wicked and tense, presented as a series of sepia tableaux, interrupted by flashes of bright red violence . . . Once you’ve fallen into the miasma of A Reliable Wife, it’s intoxicating." —The Washington Post

"Robert Goolrick's A Reliable Wife is my must-read recommendation . . . This engrossing and addictive novel will leave you both chilled and satisfied." —Chris Livingston, Summer's Best reads on NPR’s Morning Edition

"A thrilling, juicy read . . . The writing is beautiful and the story is captivating. It’s a real page-turner." —Today show

"A tantalizing pace that will have you flipping faster and faster through the pages . . .  A beautiful and haunting read, a story about all the different manifestations of love—a story that will stay with you." —Minneapolis Star Tribune

“Goolrick twists a familiar story, refashioning it into something completely original. . . . Few have permeated their narratives with gothic elements and suspense to such great effect. . . . The unforeseen conclusion provides a big payoff for readers of this tension-laden debut from a promising new talent." - Booklist