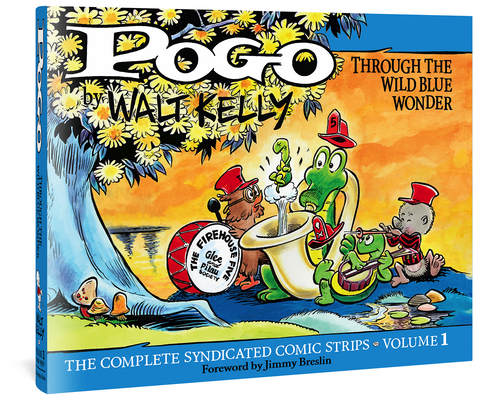 Kelly was far ahead of his time for combining fun and poetry with biting social and political satire. Here are Pogo and his pals in the very first cartoon strips, from May 1949-December 1950. More to come. — Louise Jones

The first volume of the second-most requested strip collection reprint in Fantagraphics' history.

Walt Kelly started his career at age 13 in Connecticut as a cartoonist and reporter for the Bridgeport Post. In 1935, he moved to Los Angeles and joined the Walt Disney Studio, where he worked on classic animated films, including Pinocchio, Dumbo, and Fantasia. Rather than take sides in a bitter labor strike, he moved back east in 1941 and began drawing comic books.

It was during this time that Kelly created Pogo Possum. The character first appeared in Animal Comics as a secondary player in the “Albert the Alligator” feature. It didn’t take long until Pogo became the comic’s leading character. After WWII, Kelly became artistic director at the New York Star, where he turned Pogo into a daily strip. By late 1949, Pogo appeared in hundreds of newspapers. Until his death in 1973, Kelly produced a feature that has become widely cherished among casual readers and aficionados alike.

Kelly blended nonsense language, poetry, and political and social satire to make Pogo an essential contribution to American “intellectual” comics. As the strip progressed, it became a hilarious platform for Kelly’s scathing political views in which he skewered national bogeymen like J. Edgar Hoover, Joseph McCarthy, George Wallace, and Richard Nixon. Walt Kelly started when newspaper strips shied away from politics — Pogo was ahead of its time and ahead of later strips (such as Doonesbury and The Boondocks) that tackled political issues. Our first (of 12) volume reprints approximately the first two years of Pogo — dailies and (for the first time) full-color Sundays.

This first volume also introduces such enduring supporting characters as Porkypine, Churchy LaFemme, Beauregard Bugleboy, Seminole Sam, Howland Owl, and many others. And for Christmas, 1949, Kelly started his tradition of regaling his readers with his infamously and gloriously mangled Christmas carols.

Special features in this sumptuous premiere volume, which is produced with the full cooperation of Kelly’s heirs, include a biographical introduction by Kelly biographer Steve Thompson, an extensive section by comics historian R. C. Harvey explaining some of the more obscure current references of the time, a foreword by legendary columnist Jimmy Breslin, and more.

...[An] essential purchase for any collection that values comic-strip reprints is finally available. ...[T]he inventive wordplay, idiosyncratic swamp patter, and goofy slapstick are all in full effect right from the start, as is the broad cast of loony critters... Due to run 12 volumes, this collection completes the holy trifecta, along with Charles Schulz’ Peanuts and George Herriman’s Krazy Kat, of comic strips whose influence cannot be overstated.

If Walt Kelly had written ‘regular’ books, he might be recognized today as one of the finest
satirists of the 20th Century. As a wizard of wordplay he might well be mentioned, if not in the
same breath with Lewis Carroll and Edward Lear, then in the very next.
— Chicago Sun-Times

(Starred Review) This exceptional first volume of the collected adventures of Pogo Possum should remind readers of the substantial legacy left behind by Kelly.... The volume is beautifully put together, including excellent insights into Kelly and his work ... Kelly was able to blend hilarious humor, exceptional storytelling, keen political satire, and brilliant wordplay into a strip that could be appreciated both by children and adults.

The biggest revelation of reading the first two years of Pogo is how polished and funny the strip was right from the start, and also how nearly every Pogo panel is a delight unto itself. ...[T]here’s a classic Pogo moment on just about every page of this book.

The congenial Pogo Possum and his swampland friends... spring to life in this collection of daily and Sunday comics, filled with Kelly’s characteristic wordplay. One hopes this will introduce a new generation to this comic, satiric masterwork.

— The Globe and Mail

Kelly’s drawings are just magnificent, and his sophisticated writing style was far ahead of its time. Its time has come – and Fantagraphics has gone out of its way to ensure the best possible copies of these rare strips were found, restored and preserved perfectly here for all time... A great gift for anyone – especially you.

Walt Kelly’s wit and charm is unmatched in the history of sequential storytelling, and is in evidence here fully developed. I’d get this book for Jimmy Breslin’s introduction alone. Go. Read this. You’ll charm the pants off of yourself.

Walt Kelly’s Pogo... is justifiably hailed as one of the great achievements of the postwar comic strip.... This wonderful first volume of a projected 12-volume series contains the strip’s first two official years... I salute this launch... [Rating] 9/10

This strip is funny, well-drawn, and features a huge mass of likeable characters doing entertaining things. Put it together with Fantagraphics’ excellent presentation, and you have a definite must-buy.

Timeless and magical, Pogo is a giant of world literature, not simply comics, and this magnificent edition should be the pride of every home’s bookshelf.