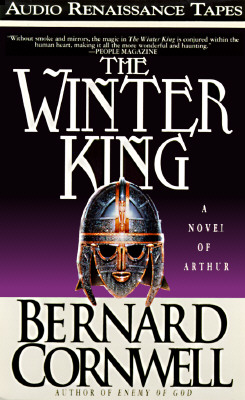 The first volume of "The Warlord Chronicles," the trilogy that forever changed the way the legend of Arthur is told.
"These are the tales of the last days before the great darkness descended....These are the tales of Arthur, the Warlord, the King that Never Was."
In "The Winter King," Bernard Cornwell, who has been called "one of the most accomplished storytellers now writing," turns to the story he was born to write: the mythic saga of King Arthur.
The saga begins in fifth-century Dark Age Britain, a land where Arthur has been banished and Merlin has disappeared, where a child-king sits unprotected on the throne, where religion vies with magic for the souls of the people. Going far beyond the usual tales of romance and chivalry, "The Winter King" introduces us to Arthur the man rather than the legend-- a true hero; a man of honor, loyalty and amazing valor; a man who loves Guinevere more passionately than he should; a man whose life is at once tragic and triumphant.
As Arthur, a military genius, struggles with his small band of warriors to keep a flicker of civilization alive in a barbaric world, Bernard Cornwell makes a familiar tale into a legend all over again.

Bernard Cornwell is the author of numerous international bestsellers, including the Richard Sharpe series. He was born in Britain, and lives on Cape Cod with his American wife.

Tim Pigott-Smith has worked in television, theater and film, and his most popular television roles include "The Jewel in the Crown," " The Chief "and "The Bullion Boys," for which he won an Emmy Award. He has appeared in numerous films, including "The Remains of the Day."

"A fantastic revision of the standard Arthurian legend."--Booklist