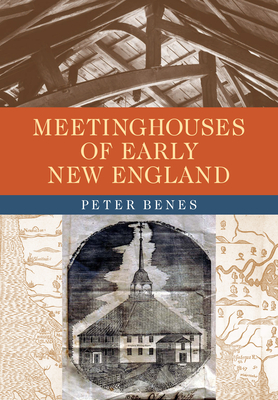 By Peter Benes
$49.95
Click Title for IN STOCK Location

Serious students of early New England will be Grateful for this scholarly gem; but armchair historians should also be delighted. Both groups will appreciate the author's smooth writing style and be fascinated by the illustrations. The perfect gift for your minister, your historical society, genealogy folks, etc. P.S.- Is your church/town in appendix B? — Bill Lewis

Built primarily for public religious exercises, New England's wood-frame meetinghouses nevertheless were closely wedded to the social and cultural fabric of the neighborhood and fulfilled multiple secular purposes for much of the seventeenth and eighteenth centuries. As the only municipal building in the community, these structures provided locations for town and parish meetings. They also hosted criminal trials, public punishments and executions, and political and religious protests, and on occasion they served as defensive forts, barracks, hospitals, and places to store gunpowder. Today few of these once ubiquitous buildings survive. Based on site visits and meticulous documentary research, Meetinghouses of Early New England identifies more than 2,200 houses of worship in the region during the period from 1622 to 1830, bringing many of them to light for the first time. Within this framework Peter Benes addresses the stunning but ultimately impermanent blossoming of a New England "vernacular" tradition of ecclesiastical/ municipal architecture. He pinpoints the specific European antecedents of the seventeenth-century New England meetinghouse and traces their evolution through the eighteenth and early nineteenth centuries into Congregational, Presbyterian, and Baptist churches heavily influenced by an Anglican precedent that made a place of worship a "house of God." Undertaking a parish-by-parish examination, Benes draws on primary sources--original records, diaries, and contemporary commentators--to determine which religious societies in the region advocated (or resisted) this evolution, tying key shifts in meetinghouse architecture to the region's shifting liturgical and devotional practices.

Peter Benes is director of the Dublin Seminar for New England Folklife in affiliation with Historic Deerfield, Inc., in Deerfield, Massachusetts. His previous books include The Masks of Orthodoxy: Folk Gravestone Carving in Plymouth County, Massachusetts, 1689-1805 (University of Massachusetts Press, 1977).