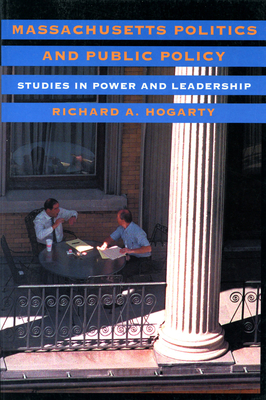 Second only to the Red Sox as a major league sport in Massachusetts is hardball politics as it is played at the State House on Beacon Hill. Drawing on over thirty years as a participant-observer, teacher, and commentator, Richard A. Hogarty provides an inside view of the Bay State's political arena, including the workings of the executive, legislative, and judicial branches, as well as the administrative bureaucracy.

Hogarty examines both the process of policymaking and the complexities of on-the-ground implementation, identifying the various participants and their roles and strategies. He describes power struggles that are entangled in intricate webs of personal and political relationships, and explores their historical antecedents.

Based on an extensive review of newspaper and media accounts, a survey of the surprisingly scanty professional literature, a close scrutiny of public documents, and dozens of personal interviews, the book addresses such topics as the delivery of mental health services, urban transportation, environmental protection, public safety, welfare, corrections, the death penalty, public higher education, ethnic politics, and state ethics reform. Hogarty analyzes the shifting problems of accountability that arise when public services are provided by a variety of political actors and organizations with a wide range of ideological motivations and social and cultural commitments.

Richard A. Hogarty is professor emeritus of political science at the University of Massachusetts Boston and a senior fellow of that institution's John W. McCormack Institute of Public Affairs. He serves as a member of Massachusetts's Mental Health Planning Council.

"Our state has a rich and tumultuous political history, but careful studies of the recent past are few and far between. This book of well-informed case studies on Massachusetts politics will help fill that gap....Wonderfully evokes the spirit of Massachusetts politics in the 20th century and perhaps the 21st as well."—CommonWealth

"Interesting, well written, well researched accounts of recent key episodes in Massachusetts political history. . . . The book will be an important resource for future policymakers and researchers seeking to understand the path of political change."—John E. McDonough, former Massachusetts state legislator and author of Experiencing Politics: A Legislator's Stories of Government and Health Care

"This book makes a lively contribution through its revealing case studies of unusual and significant politicians, bureaucrats, and business leaders. There is nothing quite like it that I am aware of....It will be particularly appropriate for political science courses."—Duane Lockard, author of New England State Politics