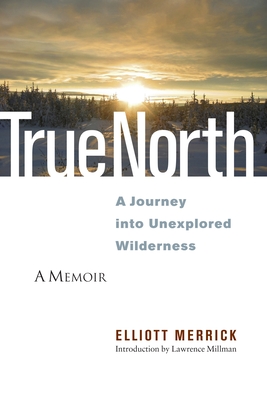 First published in 1933, a splendid tale of survival by an iconoclast who left Manhattan for the Labrador wilds then, with his new wife, accompanied a trapper on a grueling 300-mile hunting trip through the snowy wilderness. Merrick later taught English at UVM. — Louise Jones

While many people dream of abandoning civilization and heading into the wilderness, few manage to actually do it. One exception was twenty-four-year-old Elliott Merrick, who in 1929 left his advertising job in New Jersey and moved to Labrador, one of Canada’s most remote regions.

True North tells the captivating story of one of the high points of Merrick’s years there: a hunting trip he and his wife, Kay, made with trapper John Michelin in 1930. Covering 300 miles over a harsh winter, they experienced an unexplored realm of nature at its most intense and faced numerous challenges. Merrick accidentally shot himself in the thigh and almost cut off his toe. Freezing cold and hunger were constant. Nonetheless, the group found beauty and even magic in the stark landscape. The couple and the trappers bonded with each other and their environment through such surprisingly daunting tasks as fabricating sunglasses to avoid snow blindness and learning to wash underwear without it freezing.

Merrick’s intimate style, rich with narrative detail, brings readers into a dramatic story of survival and shares the lesson the Merricks learned: that the greatest satisfaction in life can come from the simplest things.

Elliott Merrick was born in Montclair, New Jersey, the son of a New York-commuting executive. After graduating from Phillips Exeter Academy and Yale University, Merrick took a job as a reporter with the Passaic Daily News. In 1928 he became assistant advertising manager for the National Lead Company, his father’s company, but Merrick seemed to have nature in his blood and, in 1929, he left the business world behind and joined the Grenfell Mission in Labrador, Canada, as a summer WOP (Worker without Pay). He loved Labrador and its people and was able to stay in the region by taking a teaching assignment for the Mission in Northwest River. It was there that he met and fell in love with the Mission’s resident nurse, Australian-born Kate (Kay) Austen, whom he married in 1930. They lived for a brief time in a small cabin near the current site of the huge Goose Bay Airport. After a number of adventures in Labrador, the Merricks returned to the United States, living in New Jersey and Vermont during the middle of the depression. Elliott Merrick later taught English at the University of Vermont. He is the author of seven other books, including the best-selling Northern Nurse.

“A tale of real hardship, of a running fight against the forces of nature, of the joys of wild life; rich in anecdote, humorous, dramatic, vigorous, and direct.”
—Kirkus Reviews

“Merrick's writing is full of detail on how to survive in the grueling cold of a Canadian winter. The book is more ‘Walden’ than wild, as the author is often contemplative, reveling in the joy of being out of the city and plunged into nature.”
—The Record-Courier

“True North is a wonderful memoir, recounting the author's travels in the wild and wonderful Canadian wilderness. I was riveted throughout the book. Whether the author was, quite seriously, discussing methods of underwear washing (hilarious) or describing the instances when everyone wanted to break camp but wouldn't admit to it, you are kept thoroughly entertained.… I thoroughly enjoyed this book, filled with beautiful narrative.”
—The Book Buff

“[True North] is the kind of book one will pick up like a Bible or a book of poetry, to re-envision the moment. Merrick expands the small details of the journey into a metaphor for living life. Like Thoreau, he urges us to live a simpler life, a life of appreciation… When 'the world is too much with [you],' as Wordsworth said, True North will take you to a place of great beauty and simplicity.”
—Read, Write, Laugh, Rewrite with Eileen Granfors

“This book should be considered a classic in nonfiction, especially among Thoreau and Emerson inspired nonfiction.”
—Wilson Knut's Witticisms