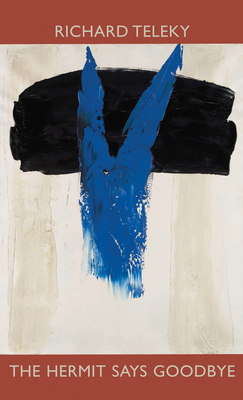 The Hermit Says Goodbye completes the triptych Richard Teleky began with The Hermit’s Kiss, followed by The Hermit in Arcadia. Through the persona of the hermit, he explores the nature of love, loss, solitude and mortality, asking what people can be to each other and what they are for themselves. As the hermit quests for understanding, he revels in—and meditates on—what the world has to tell us and what we might do with that knowledge.

Richard Teleky, a Professor in the Humanities Department of York University, in Toronto, is a critically acclaimed fiction writer, poet, and critic. His books include the novels Winter in Hollywood, Pack Up the Moon, and the award-winning The Paris Years of Rosie Kamin (which received the U.S. Ribalow Prize and was chosen the Vermont Book of the Year), and a collection of short fiction, Goodnight, Sweetheart and Other Stories; two poetry collections–The Hermit in Arcadia and The Hermit’s Kiss; two non-fiction studies–The Dog on the Bed: A Canine Alphabet and Hungarian Rhapsodies: Essays on Ethnicity, Identity and Culture. He is also the editor of The Exile Book of Canadian Short Stories and The Oxford Books of French-Canadian Short Stories. His work has appeared in numerous journals in Canada and the United States, and he is a frequent contributor to Queen’s Quarterly. His latest novel, The Blue Hour, came out in May 2017, and Ordinary Paradise: Essays on Art and Culture, in the fall of 2017.